While I'm for the most part inclined to take the In-Win GRone's aesthetic out of the equation, I do want to make a few generalized notes about the build. I personally like the gunmetal gray color In-Win uses for the case, and the steel side panels and chassis match the plastic fascia and shell very well. There's a two-toned black and gray motif that I think serves the GRone well; if nothing else, it's fairly consistent. 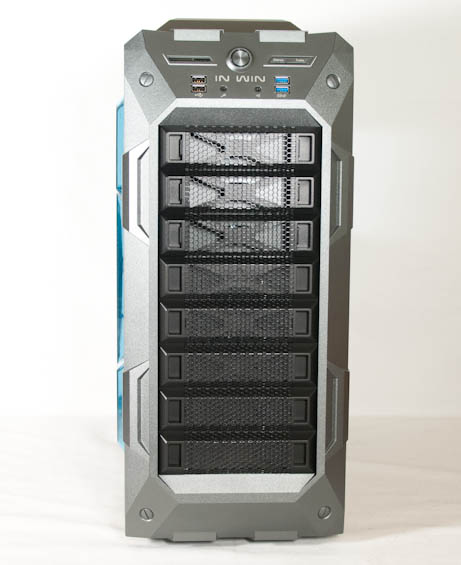 The front of the enclosure is marked by what appear to be a series of ventilated bay covers similar to the old Cooler Master Centurion, but in actuality only the top three of these covers actually hide 5.25" drive bays; the rest are for consistency's sake while also allowing fresh air to reach the front intake fans hidden behind them. Above the drive bays are a healthy amount of connectivity: two USB 2.0 ports and two USB 3.0 ports along with the usual audio jacks. Also included is a sliding fan speed switch that allows the case fans to operate in "silence" and "turbo" modes. The reset button is actually shared with the IDE access LED, which is the long sliver to the left of the power button. It's not labelled at all, but that's what it is.

When you move to the top of the GRone, there's an angled accent that's ventilated and hides the trio of 120mm/140mm fan mounts, and in front of it is the recessed SATA hotswap connector. It's not quite as elegant as NZXT's solution in the H2 but it gets the job done.

Interestingly, the left side panel has a large window that's extruded and tinted aquamarine; if you look closely you can see the In-Win logo on it. There aren't any fan mounts, though. The only fan mount on a side panel is actually behind the motherboard tray, though an enterprising user could probably swap the two side panels if they felt like the existing allowances made for cooling were inadequate. 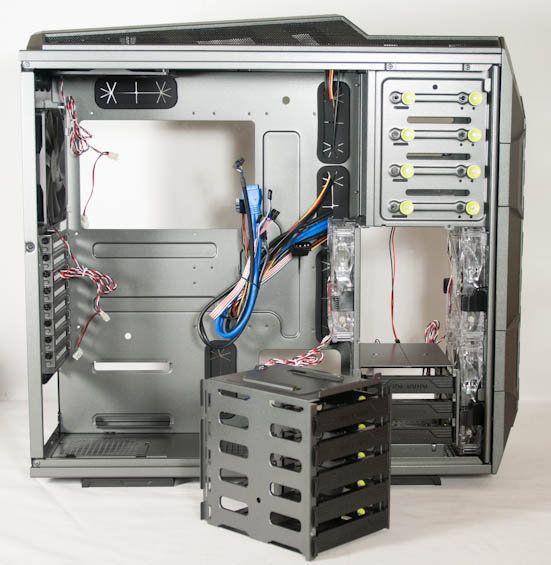 Removing the thumbscrews and popping open the GRone reveals business as usual with a few kinks thrown into the mix. In-Win positions the GRone as an E-ATX case primarily, and given the placement of the routing holes in the motherboard tray they're pushing that scenario pretty hard. There's a substantial opening next to the power supply bay, though, and both drive cages are actually removable. In-Win uses a drive sled design similar to what SilverStone employed with the FT02, where the door allows the drives to lock into place. Worth noting is the way removing the center drive cage doesn't result in losing the 140mm interior fan.

In-Win's design is for the most part clean, though they use red LED fans on the front intakes. Those fans are fairly dim and inobtrusive, presenting more of an accent, but then why tint the side window blue instead of red? We're already at three tones before we get to that blue window. Aesthetics notwithstanding, though, the GRone promises to be at least reasonably easy to assemble and I'm fairly optimistic about its cooling potential.