Acer Aspire V5-171 Notebook Review: The Death and Rebirth of the Netbook

Being essentially either a glorified netbook or a budget ultrabook, the Acer Aspire V5-171 is par for the course with Acer's more affordable offerings. Anyone expecting a great upheaval in design is going to be disappointed; this is a $550 notebook and while I don't think it feels too cheap, there were definitely some concessions made in hitting that price point. That said, there are some nice surprises too.

Probably the nicest surprise is the lack of glossy plastic. The lid is plastic but with a silver brushed-aluminum print that actually looks reasonably classy. Acer does a kind of sandwiching two-tone with the V5, where the lid and the palm rest surface are silver, but the screen bezel is black (unfortunately a glossy bezel) and the keyboard itself is comprised of matte black plastic. Finally, the underside of the notebook is matte black plastic as well, but Acer did budget users a kindness with the design here. 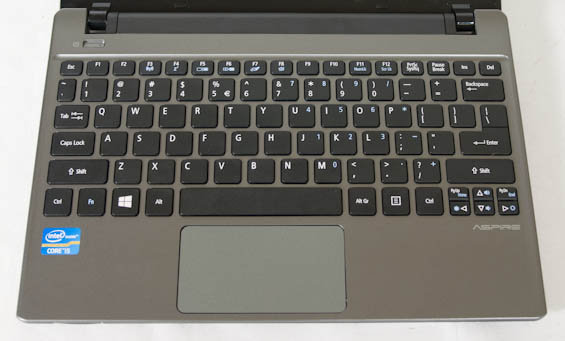 So how about that keyboard and trackpad? Acer dispensed with the floating island style keys some time ago, and the new chiclet-style keyboard is vastly superior. That said, the keys are still a bit on the mushy side and could use slightly more contour. You do benefit from the extra height of the V5, though, as the keys have more travel and depth than ultrabook keyboards tend to have. I've heard complaints about the diminutive size of the arrow keys and document navigation keys, but maybe it's my tiny, delicate hands...I haven't had a problem with them and I actually very much like the placement of the Page Up and Page Down keys. In a perfect world, though, Acer would put the Home and End keys at the top right of the keyboard, and then have Print Screen and Break as the Fn combinations for the Insert and Delete keys.

Acer keeps the clickpad on a separate piece of plastic, and given the dimensions of the notebook I'm much more apt to forgive them for using a clickpad instead of having dedicated mouse buttons. The height of the clickpad is already cramped enough, and side-mounted dedicated mouse buttons have never been a good idea. I've read a couple other reviews of the V5 and the clickpad has been a source of consternation, but I'm going to dissent. It's not great, but it's not the worst clickpad I've used and for the most part it's actually pretty usable. Sensitivity is less than ideal for the mouse gestures that run Windows 8, but at the same time, Windows 8 benefits tremendously from the clickpad. 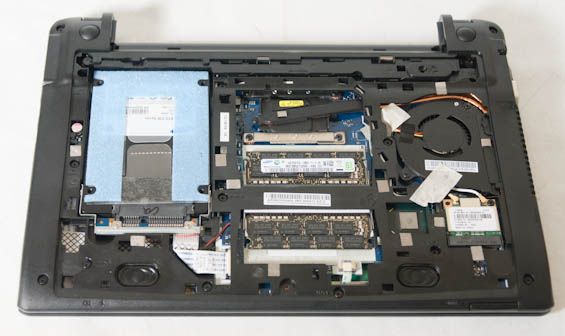 As I mentioned before, Acer does the end user a solid with the bottom of the notebook. Air is vented primarily through the side vent (meaning you can actually use the V5 on your lap), but the battery is user replaceable and the bottom panel is actually a single piece that snaps on and is held in place by a solitary screw. Remove it, and you have access to everything. You can upgrade the wireless card with another half-height PCIe card, replace the hard drive, and in a rare move for a notebook in this class, there are actually a pair of DIMM slots instead of some of the RAM simply being soldered to the motherboard.

Ultimately there's some flex to the chassis and the down-firing speakers sound pretty terrible, but the level of user serviceability, usable keyboard and touchpad, and smart thermal design (more on this later) go a long way towards bringing value to the V5 and making it feel more like an inexpensive notebook rather than just a cheap one.