In the land of the evolving BIOS, one everlasting memory of MSI will stick with me always – the propensity for MSI to include games in the BIOS. Back on the initial launch of graphical interface BIOSes (UEFIs) on the P67 chipset, MSI’s initial design was to offer a series of options using colors, but also to include a section involving simple games like Breakout, Pairs, and some Snake derivative. While a baffling situation for any reviewer to be in, it did point out the obvious nature of what a graphical BIOS should be – interactive, appealing and easy to use. As a technical exercise, the games did their job, but the games were clearly not going to stay.

Since then, MSI have taken two steps forward is aesthetics, but two steps back in accessibility and design. What we have had since X79 is literally a ‘winning’ design – technically the third place in an internal competition at MSI to design the next BIOS (those that came first and second were apparently not suitable for implementation). This BIOS is great for information – at the front screen we get vital information that should be in any BIOS: the motherboard and BIOS version, the CPU and CPU speed, the memory count and speed, and the CPU temperature. We also have access to some secondary important characteristics such as boot order, time and date. 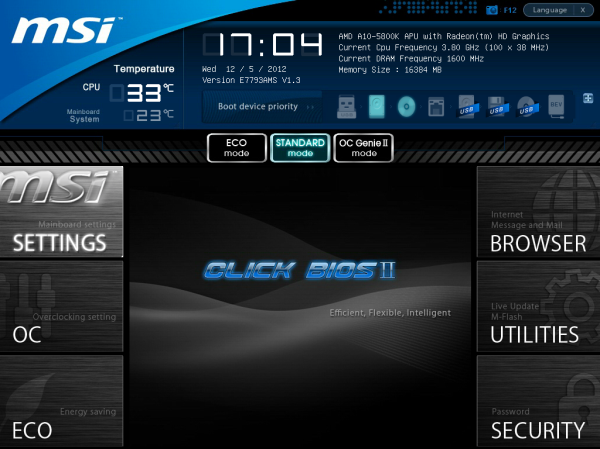 The downside in the BIOS lies in the selection of options. Choosing a menu on the side of the BIOS merely gives a textual list of all there is to offer. It does not embrace the spirit of interaction, and when faced with a wall of text (such as the OC menu), it is not pleasing to decipher. To use a baseball analogy, the MSI system is neither a hit nor a strike out/pop-fly – I see it more as a 4-ball walk: enough to get to first base and potential to develop, but could do better. 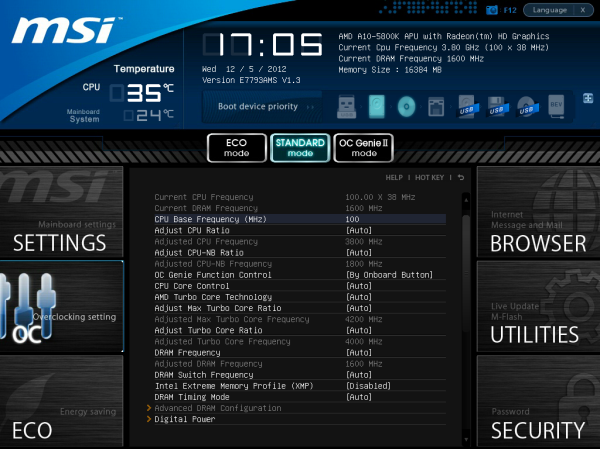 The options available in the BIOS seem to come from two different sides of the development team. In the Settings Menu we get access to several sub-menus, each relating to their corresponding target – USB Configuration, Hardware Monitor, Power Management et al. In the OC menu however, as shown above, we are presented with the aforementioned wall of text. Each option is on a new line, and no separation between the CPU options, the OCP options, the LLC options, the memory options, and so on. Not only this, some of the options could be construed as confusing at first glance (such as Digital Compensation Level, which may well be VDroop, LLC, or some other term) unless you are completely au fait with MSI terminology. The BIOS does not offer any assistance in learning what each of these commands mean, or whether an extreme overclocker needs 0% or 100% for a particular command as different manufacturers have different interpretations. I would instigate a redesign if I got hold of this BIOS code.

It should also be noted that specific to this BIOS, we can only select up to DDR3-2133. Any increase over this memory speed will also require some BCLK adjustment. 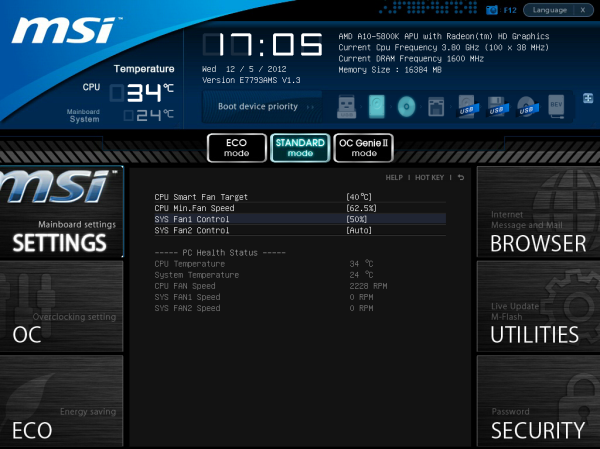 Being a motherboard, controlling the fans is important. Our fans are controlled through the Fintek SuperIO chip – on the MSI FM2-A85XA-G65 this gives our CPU and SYS fan headers two different types of option. The CPU header is a ‘Smart’ target, which allows us to specify a simple gradient between two optimal temperatures. The SYS fan headers in comparison are limited in their speed range, leaving it with a fixed RPM. 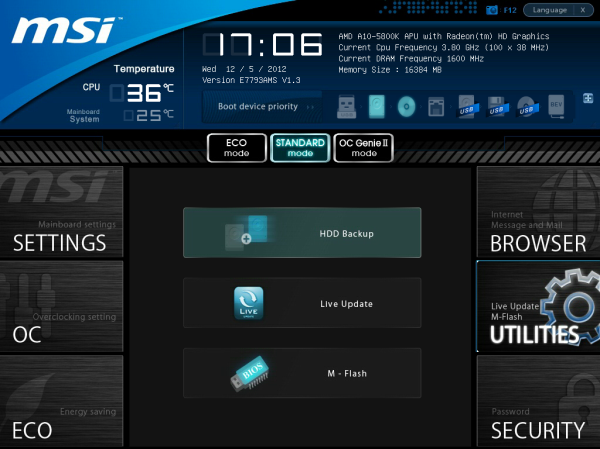 Most of the options in this BIOS are no different than options in other vendors’ BIOSes – AHCI is enabled by default for example. There are no automatic overclocking options except ‘OC Genie II mode’, clickable at the top. In the Utilities menu we can activate a BIOS update via a USB stick, or offer a Live Update via the internet if a suitable network configuration is supported.

On top of all the features, there are areas where this BIOS can be improved. A lot of users, myself included, will thoroughly abuse the S3 ‘Sleep’ functionality of Windows, allowing for a quick boot back into the OS. Normally this allows the user to click the mouse or type on the keyboard to turn the PC back on. Unfortunately with this MSI board, the only way to get out of the sleep modes is to press the power button itself.