The big new news information disclosure from Qualcomm relates to the capabilities and specifications of their new flagship transceiver, WTR1605 and how it compares to the previous generation, RTR8600. There are a number of new additions, but at a high level it boils down to different packaging (wafer level instead of plastic), inclusion of support for more primary receive bands (7 instead of 5), and support for one more GNSS constellation (the addition of the Chinese system, Beidou) over the previous generation. WTR1605 comes in two flavors, with WTR1605L including L for LTE. The first character in the name indicates package type, which is now wafer-level (hence the W) instead of a plastic, which Qualcomm tells me it can now inspect and test just as effectively as the plastic packaged previous generations. This allows the overall size of WTR1605L to be smaller in spite of it still being fabricated on a 65nm RF CMOS process (there was some previous documentation which suggested that WTR1605L was 28nm RF CMOS, this is not the case). 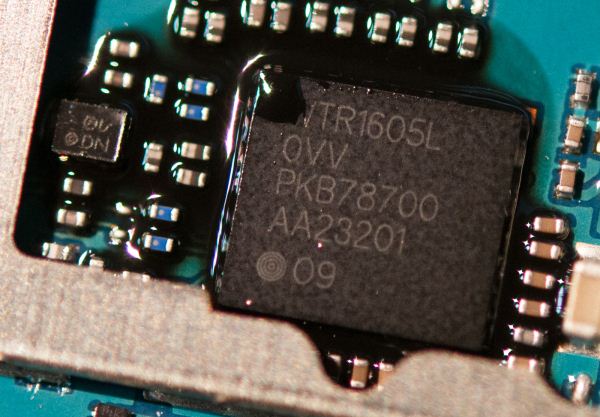 As a deviation, I also enquired whether we’ll see transceiver ever make it back inside the baseband package, similar to how MDM6x00 was a combination of baseband and transceiver in one single package. Other baseband manufacturers also have sold combination baseband and transceiver parts before, for example LG’s L2000 LTE chipset is a combo part. I originally suspected that this move back to discrete was done to decouple the two roadmaps (since we’ve seen MDM9x15 originally ship with RTR8600 and only now have seen phones with WTR1605L inside), but it turns out the reason is both the multiplicative effect of yields when combining multiple devices into one package (essentially cost), and that the overall system size is smaller with discrete wafer level packages for transceiver.

The biggest change with WTR1605 is the inclusion of two more primary receive (Rx) ports over the previous generation, RTR8600. Qualcomm uses a low band, mid band, and high band convention for its ports, which is a common industry practice. These ports are tuned to work over the given band of frequencies, and are all created equal in terms of capabilities, and all wide enough to all do 20 MHz LTE or more. The addition of one more low band and mid band primary receive port on WTR1605 enables a number of configurations for handsets that weren’t possible previously without including a switch outside and incurring some loss. Probably the best example is delivering a device with both Band 17/12 and Band 13, 700 MHz North American coexisting on the same handset (Band 13 is Verizon LTE in the USA, Band 17 is AT&T LTE), and for the extra mid band port, Band 3 (1800 MHz) LTE. More ports means more bands without using up a lot more area on the PCB, and the number of LTE bands is continuing to increase.

I was a bit intrigued by the loss of a mid band diversity port from RTR8600 to WTR1605 and what implications this would have on LTE operation where receive diversity is mandatory for all UE categories, and because this “diversity” port is really the second receive chain mandatory for UE categories 2 and higher. The answer is that the mid band diversity port can accommodate 6 dB of difference from the primary port and the receiver can still do its diversity combining (MRC or so on) and get appreciable gains out. Thus adding a switch in front (around 0.2–0.5 dB of loss) doesn’t incur so much as to be a real problem — and the tradeoff yields one more mid band primary port. 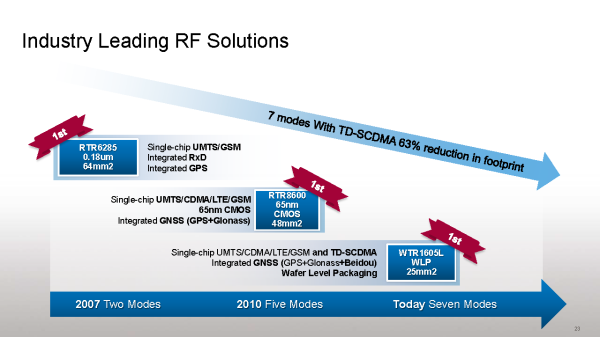 The final addition is TD-SCDMA compatibility which is very important for the Chinese market, specifically China Mobile. Previous to this disclosure, I was unaware that only WTR1605 in conjunction with appropriate baseband is capable of working with TD-SCDMA. This second chart lists all the currently disclosed bands that all three generations are specified as supported, and indicates that only the latest generation includes TD-SCDMA support. The fact that WTR1605 is necessary for TD-SCDMA has implications for a number of handset designs which shipped with MDM9x15 and included RTR8600 for time to market reasons but by an OEM with clear designs on shipping TD-SCDMA enabled SKUs. 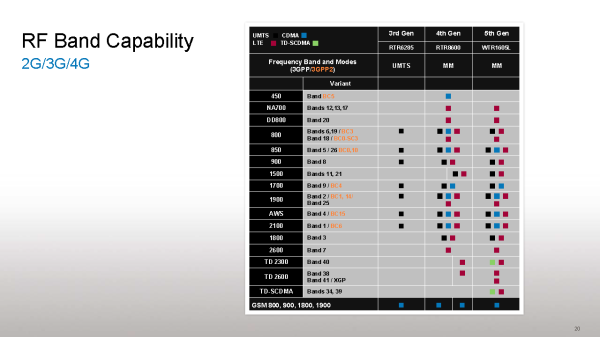 I expect that WTR1605 will stick around and be paired with MDM9x25 in the future in addition to MDM9x15 where we’ve seen it first emerge. Clearly Qualcomm feels its synthesizers onboard WTR1605 are up to the task for the number of inter-band and intra-band carrier aggregation combinations being posed in 3GPP Release 10.

Overall WTR1605 is a step in the right direction with more primary receive ports over the previous generation. More ports means a step closer toward the holy grail of a single SKU with all the necessary LTE bands for multiple regions. Unfortunately even with 7 total ports for bands, LTE roaming and shipping a single SKU still remains a difficult to impossible prospect for even the most aggressive OEMs. Obviously the long term goal is to be able to accommodate more ports, the challenge is doing so without driving up cost or size dramatically.