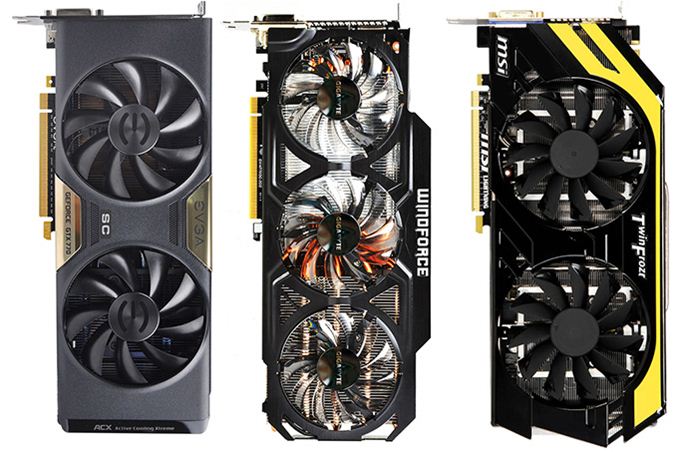 Although it admittedly sounds derogatory at first, “small and unassuming” has become a good way to describe NVIDIA’s GK104 GPU. Unlike in past generations where NVIDIA’s high-end workhorse and flagship GPU were one in the same, for most of the lifespan of Kepler it has been GK104, not GK110, that has been the company’s high-end workhorse, being used in  products spanning from $200 cards to $500 cards. At under 300mm2, GK104 products have proven capable of beating and/or tying AMD’s contemporary (and comparably more complex) products, which although a very good outcome for NVIDIA is certainly not the one we would have expected going into this generation.

At the same time however, GK104 being NVIDIA’s high-end workhorse has led to some unusual outcomes as NVIDIA attempts to pace themselves over the complete generation. Rather than scale down the more expensive GK110 GPU and its assorted products, NVIDIA has scaled up GK104 to keep their product lines fresh while continuing to hold off AMD, which is something they’ve never done before in this manner. This is especially evident in GeForce GTX 770, a very potent product that has seen NVIDIA release the first video card with 7GHz GDDR5, while in the process sacrificing some of their hard earned efficiency gains to reach their lofty performance goals. As a result of this GTX 770 is a product that is being pushed close to its limits right out of the box.

We bring this issue up because when it comes time to talk about custom vendor cards – as we’ll be doing today – it puts NVIDIA’s partners in an interesting and somewhat difficult position. Partners typically set their products apart by a combination of coolers, factory overclocking, and value added extras such as software and support. With NVIDIA pushing GTX 770 so hard partners aren’t getting access to the same lofty headroom that they enjoy in other products (e.g. GTX 780), which means GTX 770 ends up being a bit more constricting for the partners. To be sure there’s still room for them to maneuver on the clockspeed front, but when it comes to customizing GTX 770 a factory overclock isn’t going to make as much of an impact here.

With that in mind, today we’ll be looking at three such customized GTX 770 cards, from EVGA, Gigabyte, and MSI. All of these are semi-custom and fully custom cards pairing factory overclocks with custom coolers and custom software, so all three vendors are playing all three angles. How do these three partners set apart their products, especially in light of the constraints we just mentioned? Let’s find out.

Our first card for this roundup is EVGA’s GTX 770 Superclocked ACX. Like its bigger brother who we reviewed last month, the 770SC ACX is a less than typical product for EVGA. The card itself is a semi-custom card, utilizing NVIDIA’s reference board but replacing NVIDIA’s Titan-esque metal blower for EVGA’s new ACX cooler. All of this is then wrapped up with a moderate factory overclock that sees EVGA ship the card at 1111MHz core, 65MHz (6%) over the GTX 770 reference clockspeeds. 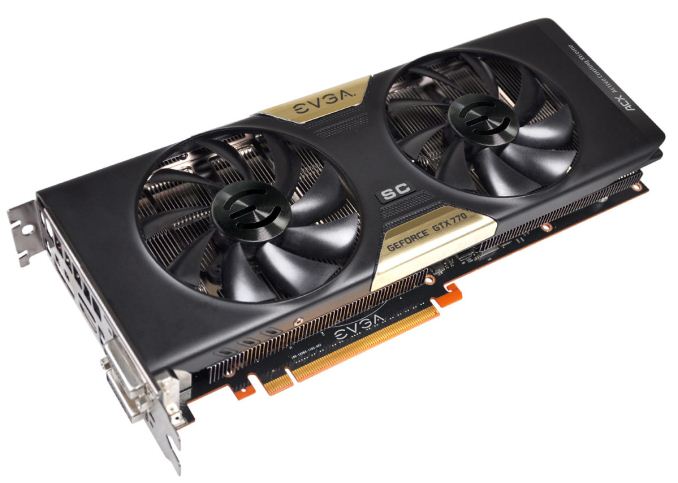 Like the 780SC ACX, the 770SC ACX marks the first time we’ve seen EVGA’s new ACX cooler in this category of product. The ACX cooler is a notable departure from the norm for EVGA, who previously did not seriously involve themselves in the branded custom cooler market. With the ACX cooler EVGA is not only looking to tap into that market, alongside the larger market for open air coolers, but the company is looking to make a name for themselves based on build quality of their cooler, something EVGA’s competitors don’t always invest as heavily in and/or call as much attention to.

Meanwhile everyone has their own slight variations in design here, with EVGA focusing on running a full length heatsink to maximize their heatseak surface area. The heatsink itself is a two segment heatsink with 5 aluminum heatpipes running between the segments and the GPU. An aluminum baseplate runs the length of the card below the heatsink, providing both rigidity for the card and cooling for the VRAM and discrete components. 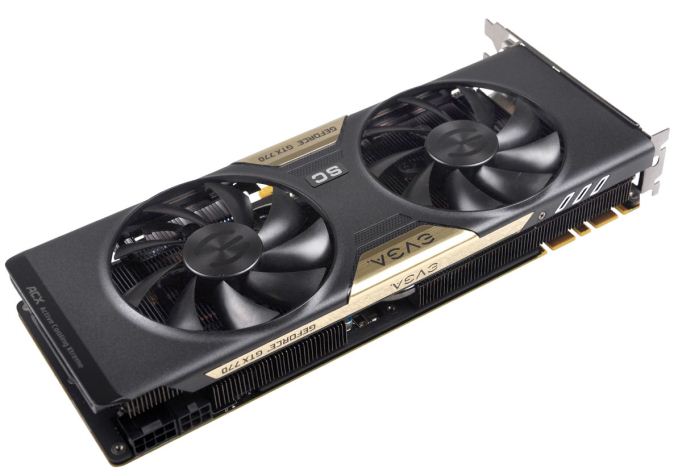 Cooling and factory overclock aside, the 770SC ACX is otherwise standard for a GTX 770 card. The card runs 10.5 inches long for both the PCB itself and EVGA’s ACX cooler. I/O is also standard with NVIDIA’s display I/O configuration of 2x DL-DVI, 1x HDMI, and 1x DisplayPort 1.2. Even the official TDP is the same at 230W, requiring the standard 6pin + 8pin external PCIe power connectors, which will be unlike some of the other cards in our roundup. 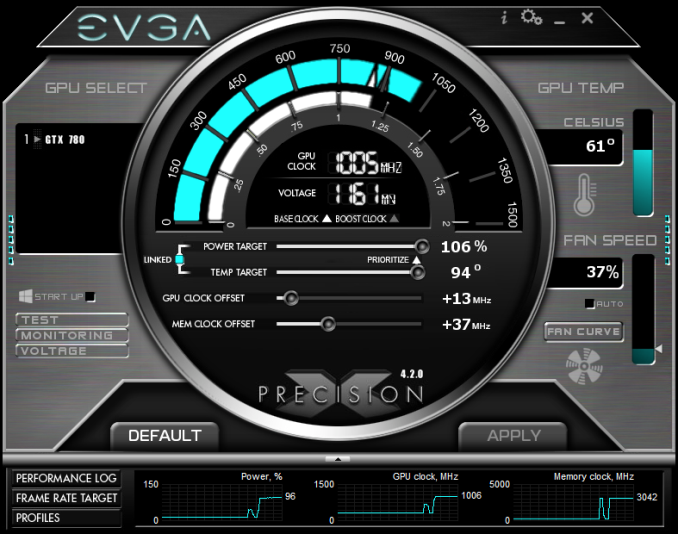 Meanwhile, as with all of EVGA’s North American cards, the 770SC ACX comes with EVGA’s standard 3 year transferable warranty, with individual 2 or 7 year extensions available for purchase upon registration, which will also unlock access to EVGA’s step-up upgrade program. Finally, the MSRP on the card is $409, only $10 above the MSRP for the standard GTX 770. However with a $10 mail in rebate active as of the time this was written, it brings the card down to $399, the MSRP of the stock GTX 770. As a result the card is something of a no-brainer within EVGA’s lineup, as it leaves no reason to purchase a slower card. The mild performance gains from the factory overclock won’t burn up the chart, but it makes the stock GTX 770 sufficiently redundant in performance.