For the Kaveri launch, a number of review publications received the FM2A88X Extreme6+ from ASRock. This is a motherboard that was released several months before the Kaveri processors hit the market, but adhered to specifications for both Richland and Kaveri APUs. Today we are reviewing this motherboard, which threw up a surprise or two.

The AMD Kaveri launch was a bit of a mêlée – two weeks to test a dozen processors in our new benchmarking suite, both in terms of CPU and IGP performance, with the big write up at the end. At the time I used the FM2A88X Extreme6+ motherboard, and in order to avoid complications I put on some rock solid air cooling and it sailed through the process. When I removed the extra cooling, a heat-related issue started to occur. I noticed the VRM heatsink getting hot, and as a result the system was reducing frequencies after extended workloads. After checking everything in the software side was OK, I got an infrared thermometer to probe some of the components. When the VRM heatsink showed 88C after 5 minutes of encoding work, and 97C after an hour, I had found the culprit of the issue. 88C is a rather high temperature, despite these components are usually rated to 105C. Since I finished testing the motherboard, ASRock has launched several new BIOSes, which I tested after consulting ASRock. The final result was that the system till reached 80C after 10-15 minutes of hard CPU work (normal work rather than a power virus) and 92C after 25+ minutes.

This might be seen a stern start to a motherboard review, especially one that has won awards elsewhere and performed well in our high-end air cooled testing. The FM2A88X Extreme6+ is a full sized ATX motherboard using the A88X chipset, supplanted with an 8+2 power phase design. From the chipset we have eight SATA 6 Gbps ports (7 regular + 1 eSATA), 6 USB 3.0 ports, an x8/x8 + x4 PCIe layout and support for up to 64GB DRAM from four memory slots. ASRock's website states that this motherboard can be part of a system that supports 4096x2400 at 60 Hz via DP 1.2.  Other video outputs are present as well (VGA, DVI-D and HDMI). 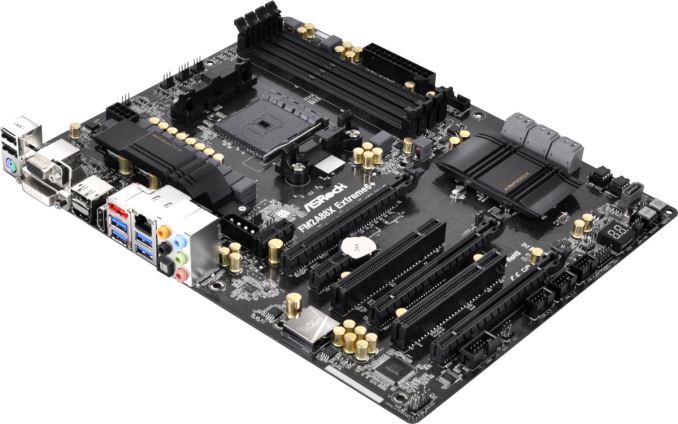 ASRock’s additions to the base chipset include support up to DDR3-2600 on the memory, a Realtek ALC1150 audio codec (rated at 115dB SNR) with a TI NE5532 headset amplifier, a Qualcomm Atheros AR8171 network interface, six fan headers, power/reset buttons, a two digit debug, an ASMedia ASM1042 for two additional USB 3.0 ports and the ASRock BIOS/Software ecosystem that is ever improving.

In our performance testing, the motherboard and CPU combination trades blows with another FM2+ motherboard we are currently testing, winning in a few CPU and gaming tests. The system scores under 10 seconds for a Windows 7 POST time, although the DPC Latency is matching that of our Intel 8-series results oddly enough.

ASRock is often very aggressive on pricing, and the FM2A88X Extreme6+ comes in at $105, near other motherboards from ASUS, GIGABYTE and MSI. ASRock is continually building an ecosystem around the BIOS utilization and software functionality in order to make their products more desirable, though additional cooling on this model might be recommended.

ASRock’s 2013 livery moves to 2014 with the higher end chipset SKUs bathed in black and gold colors – the FM2A88X Extreme6+ is no exception. 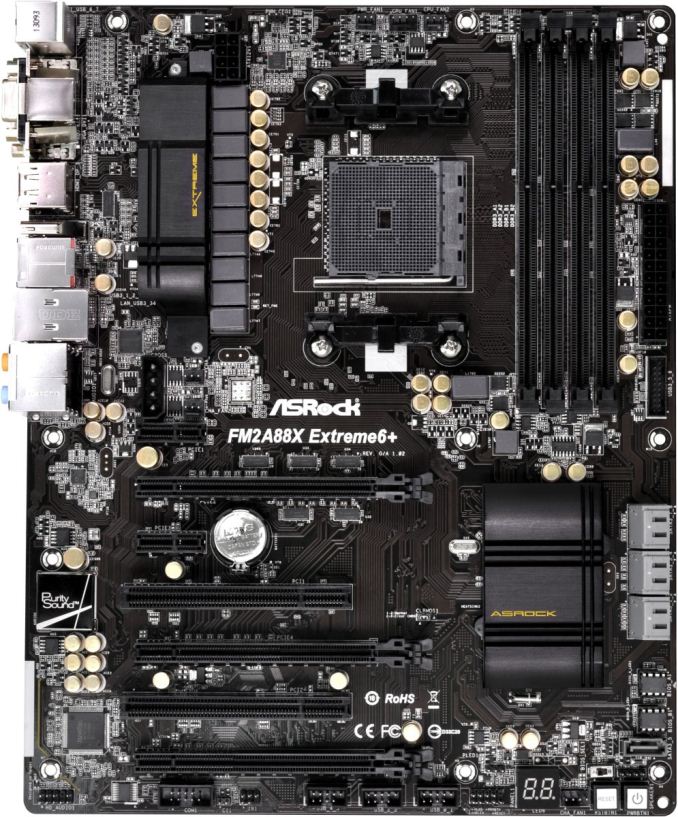 The socket area has no obvious outline, but opens up the AMD socket to large coolers in all directions. The power delivery to the left of the socket gives the 8+2 configuration, although the heatsink provided is quite small with no extension or additional fan. There are five fan headers around the socket, three above (CPU 4-pin, CPU 3-pin and PWR 3-pin) and two underneath the power heatsink, both CHA 3-pin. The final fan header on the motherboard is a CHA 4-pin in the bottom right.

Moving clockwise around the motherboard, the DRAM slots are double ended latch mechanisms, although they use the thinner latches with a full sized slot. Underneath the 24-pin ATX power connector is a USB 3.0 port, followed by six of the SATA 6 Gbps ports. ASRock provides two BIOSes on the Extreme6+, both replaceable should one fail. Next follows another SATA 6 Gbps port and a BIOS selector switch.

The chipset heatsink is small to cater for the A88X chipset (~7W). The sole additional controller on the motherboard is an ASMedia ASM1042 – a USB 3.0 controller near the rear IO that does not need a heatsink.

The PCIe layout uses two PCIe 2.0 x1 small slots, two PCI slots, two PCIe 3.0 slots (in either x16/- or x8/x8 mode) and a final PCIe 2.0 x4 slot from the chipset. This final slot is designed for other non-gaming GPU PCIe devices, although it can be used for 3-way CrossFire at a lower-than expected scaling rate. For users wanting to put three power-hungry devices into the full length PCIe slots, ASRock provides a 4-pin molex connector for extra power. In my opinion, the location of this connector is frustrating, requiring cables to reach over the motherboard. Other manufacturers have utilized SATA power, or 6-pin PCIe connector, at the edge of the motherboard. This is a preferred location, as it does not require cables reaching across the system.

On the bottom of the board we have a good combination of power and reset buttons coupled with a two-digit debug LED. If I had my way, these would be on all motherboards to help with debugging issues. Also present are three USB 2.0 headers, a COM header, a Front Panel audio header, a front panel header and one of the aforementioned fan headers.

The addition of a USB 3.0 controller and a high-end Realtek audio codec puts the Extreme6+ high up the product stack for an AMD FM2+ motherboard. Unlike Intel were a $400 motherboard might be common, motherboard manufacturers tend not to splash out on an AMD motherboard (with PCIe PLX switches or obscure lane allocations) purely due to demand and volume.