All consumer electronics, in order to be deemed safe for use, have to go through a certification process based on electrical noise, impact testing, vibration testing and heat testing. This is becoming especially more important in the motherboard space as these certifications can act as selling points, or help ensure a lower return rate. Typically these testing areas at motherboard manufacturer headquarters are off-limits to almost everyone, but we had special permission and a tour guide to take us through. These are also often secret areas, and we were unable to take pictures, however ASUS appointed one of their PR team as a photographer and provided vetted images after this part of the tour. These images are what I saw with my own eyes, and there are no obvious parts that ASUS left out from these images from what I was shown.

The bit of the tour I was most excited to see was the semi-anechoic chamber. These rooms are awesome (this was my second visit to one), because they are usually several stories underground and designed to minimise any form of noise whatsoever. 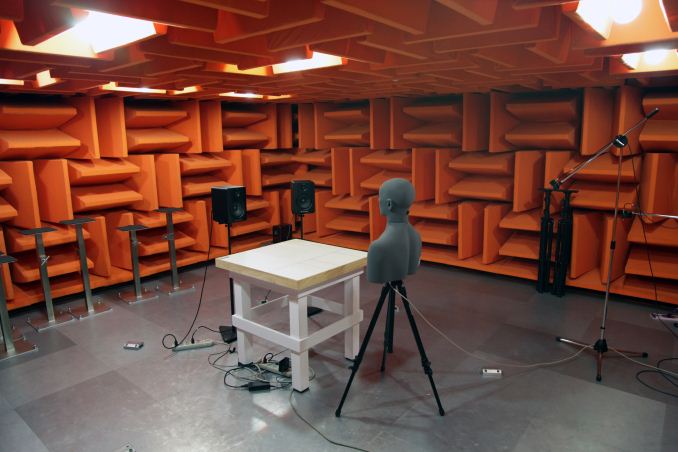 The walls and ceiling are made with noise dampening materials, and we were far enough underground to avoid any large trucks producing additional noise. The purpose of this room is to detect electrical interference on a product, or to test audio hardware. Standing in this room without making a noise in certainly eerie, because the loudest thing you can hear is the blood rushing through your ears. There are scare stories about how one of these rooms can drive you insane, because even talking in an anechoic chamber is strange given that the sound does not bounce off the walls. All you can hear is the sound that comes directly at you, there is no echo. When we moved outside of the room back into the control room, the screens showed that the base level of noise was at 15 decibels. To put that into perspective, 30 dB is the sound of a leaf rustling, and due to the logarithmic scale of sound, that 15 dB difference equates to a 32x quieter sound than a leaf. So what is making 15 dB of noise when the room is closed?  It comes from the electrics, such as the hum of capacitors or the light bulbs. If anyone has a chance to experience such a room, I highly recommend it. 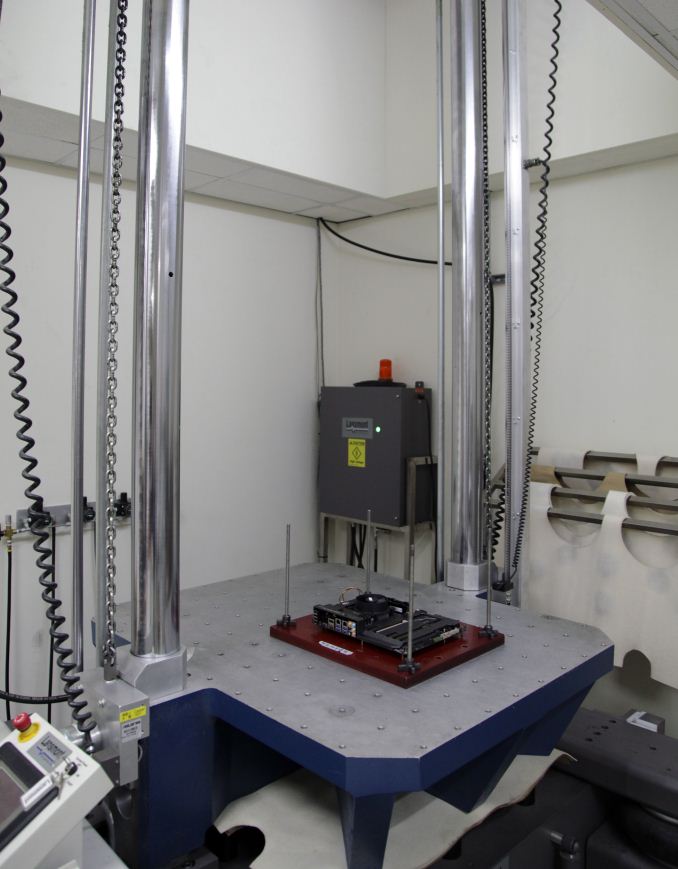 In one of the testing rooms is this machine, an impact tester. The motherboard is fixed to the red block in the middle, and raised several feet in the air: 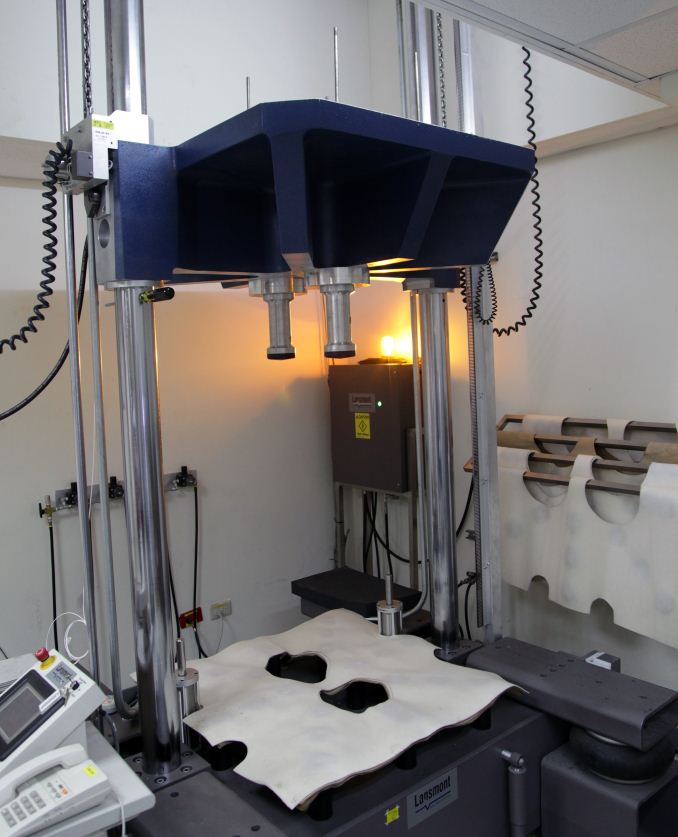 The whole apparatus is then dropped (under gravity) and then checked for loose components. This process is repeated as required. 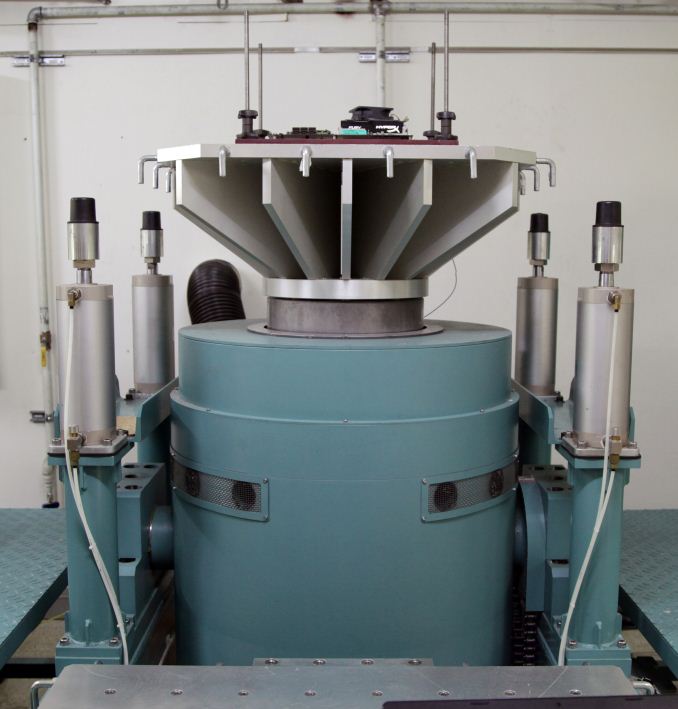 This is a big vibration machine, shaking the system either horizontal axis several dozen times a second. Again, this is another test to verify that the system does not fall to bits and still works after quick changes in impulse forces. 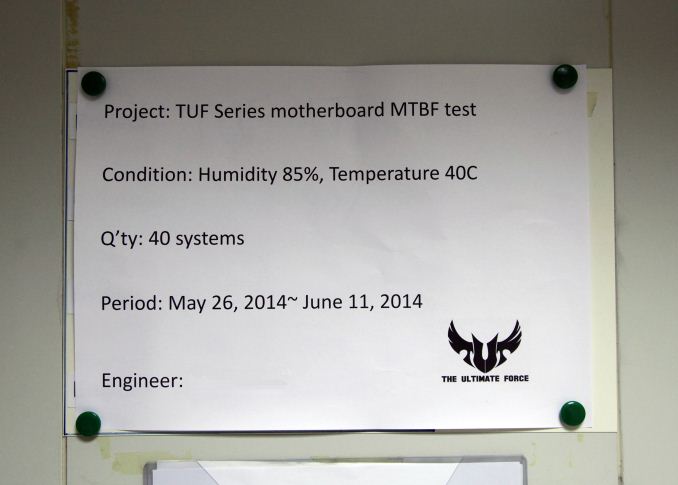 Ever wondered how manufacturers can offer a MTBF (mean time between failures) value even when they cannot have tested for that long?  Well at this point we have the heat chamber, and as this sign suggests, forty systems are subjected to a 40ºC ambient temperature at a high humidity for sixteen days while running benchmarks such as 3DMark. 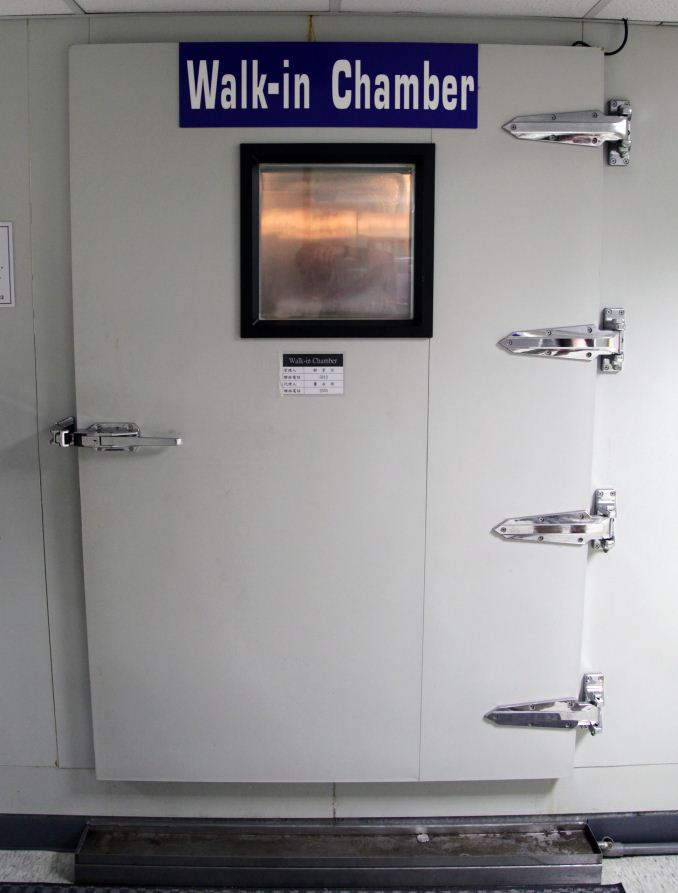 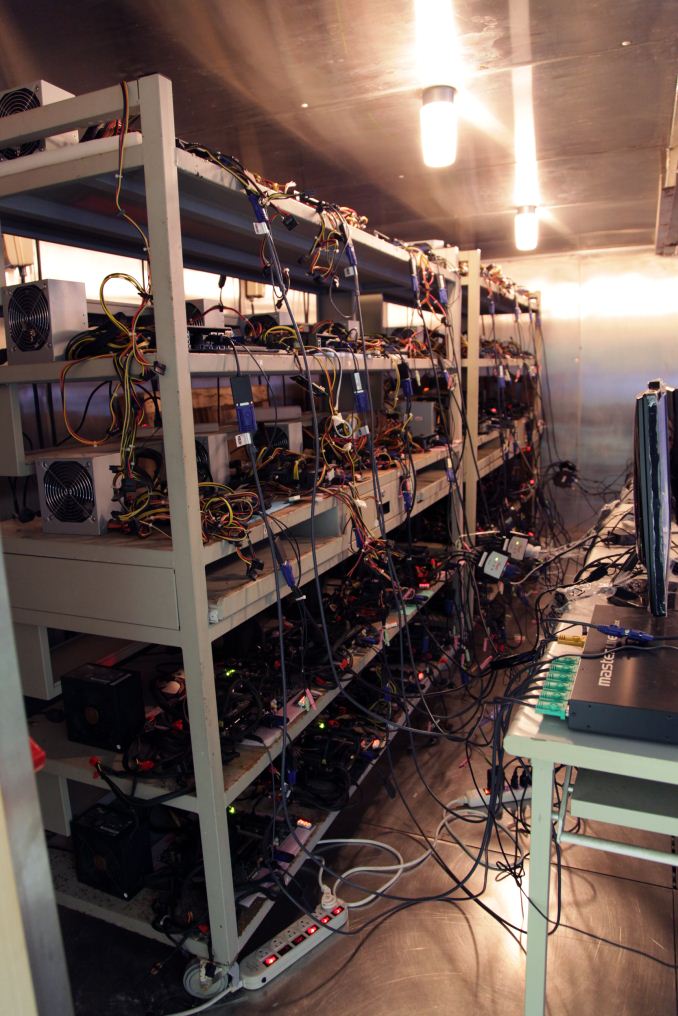 As is typical for an event like Computex, I was in a suit, and I walked into this room. It was certainly hot, especially with the circulating air and the high humidity. Within about 20 seconds my brow was starting to sweat, and after 60 seconds I left the room with sweat forming behind my ears. In the past we have seen motherboards that have been certified to run in these environments or warmer, for longer, as a selling point for the product. More often than not, this sort of testing is also a major part of a server product, but ASUS’ TUF line is also subject to this stress. 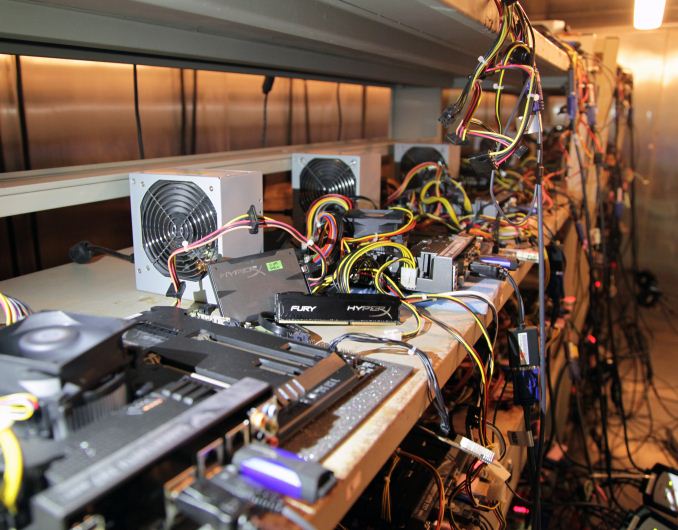 Another element of the TUF Range, along with the longer warranty, is meant to be its ability to withstand stress. I saw one room in the testing facility where motherboards were wired up to pressure sensors in the key areas: 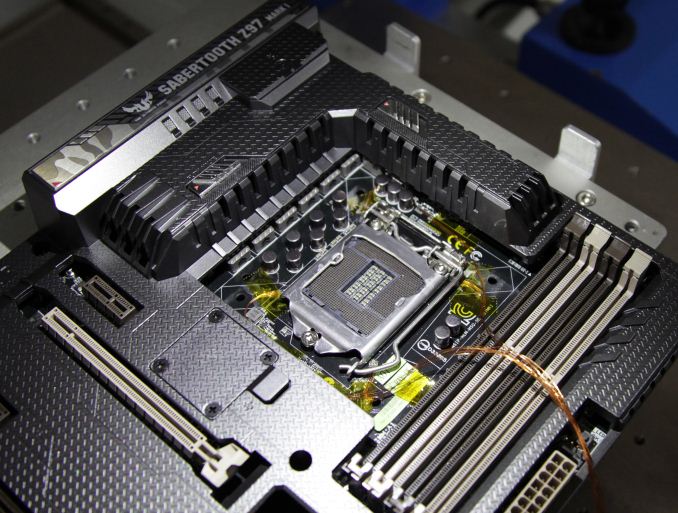 This motherboard was then subject to localized pressure point testing: 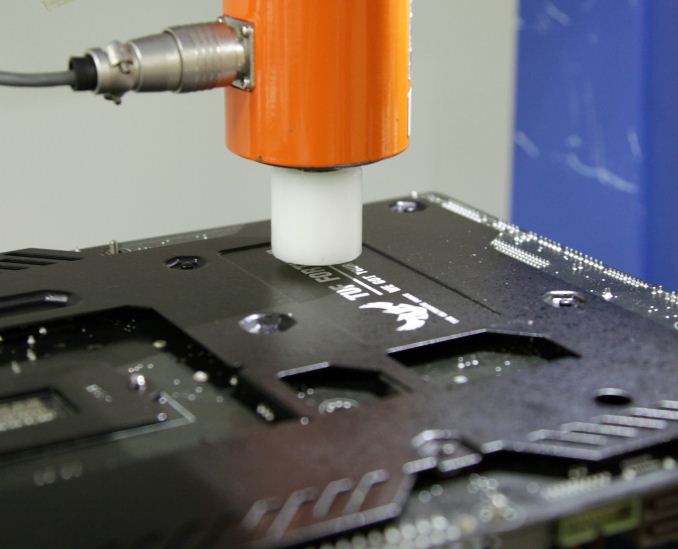 There was also a twist test: 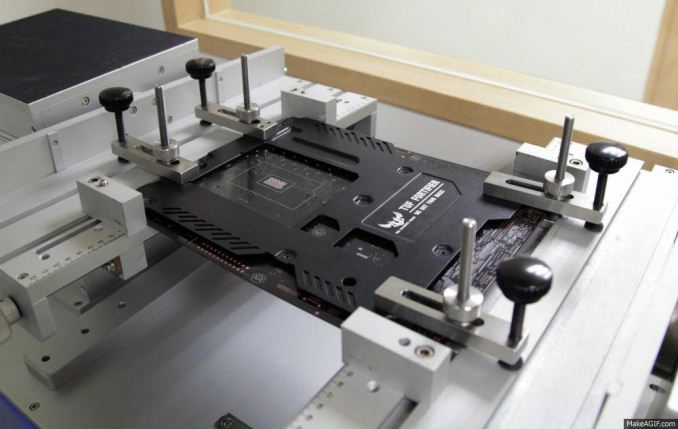 Here the system is placed under torque, or more precisely, a rate of change of torque per unit distance. This makes the motherboard twist repeatedly (the machine reversed direction every couple of seconds), such that there was a definite bend to it:

This amount of bend might seem unreasonable for a normal usage scenario, especially for the end-user, but there are obvious advantages to testing the motherboards almost to destruction at this point.

I asked about how many motherboards go through this procedure. It was obvious that not every motherboard does, otherwise not many would go on sale. The answer was less clear, though every batch has a proportion of motherboards taken and tested. If those pass the tests, then the batch is clear for sale.

Many thanks to ASUS for the tour of its testing facilities, and for seeing how the staff in the main HQ are catered for. Below is a full gallery of the images we took for the visit, and look out for the transcript from our interview with Dr. Albert Chang, Senior Division Director in R&D for the entire Motherboard Business Unit, in the next few days.