The first thing that anyone will ever do with a smartphone is hold it, so we will start with the design of the phone. If you have ever seen or held any Lumia phone, then you will instantly recognize the 630 as a Lumia. The polycarbonate back is much thinner and more flexible than the 620, but has an excellent matte texture to it which makes it easy to grip and hold. The design has progressed from the earlier Lumia models with removable backs, and now features nicely rounded corners, and an angular side which makes the device quite comfortable to hold on to.

As is often the case with Lumia phones, there are several colors to choose from and in this case you can get white, black, yellow, green, or the color I received as a review unit which is a nice bright orange. As someone who has always owned black phones, I have to say that I’ve grown to really like the orange.

The power and volume buttons can be found on the right side of the device, with the micro USB port on the bottom, and the 3.5 mm jack on top. The back has the 5 MP camera sensor, a speaker hole, and a very faint Nokia logo. There is no fake chrome, or fake leather. This is a plastic phone that is made out of quality plastic, and with the small by today’s standard display of 4.5”, the phone fits nicely in the hand and is quite comfortable to hold.

The back of the device peels off, unlike older Lumia phones which definitely popped off. Behind the removable back cover we get easy access to the SIM slot (or dual SIMs if applicable) as well as the replacable battery and a microSD slot. 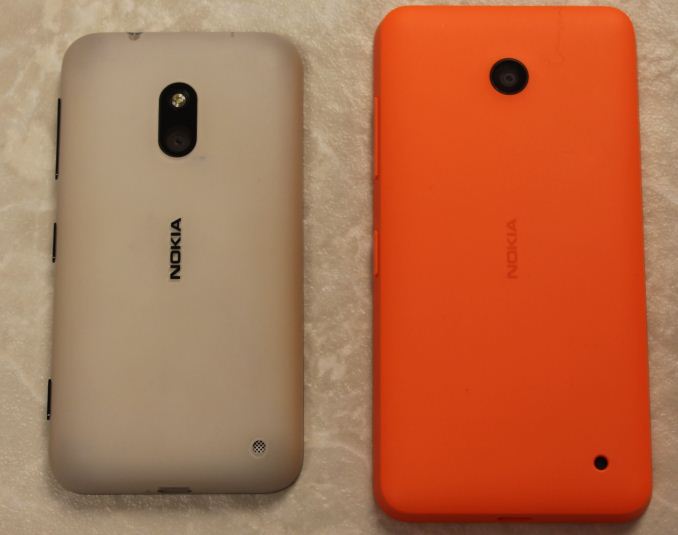 The move to on-screen buttons for the back, home, and search keys was something that took me no time to adjust to. You can set the device to provide haptic feedback of button presses, and in that sense they work and feel exactly like the capacitive buttons of most phones. I also accidentally triggered the buttons less than the hardware buttons of other phones I’ve used, which I attribute to not having the buttons so low on the device, so if I rest my thumb at the bottom, I don’t hit search. A nice touch to the on-screen buttons is you can customize the navigation bar color to be always dark, match the background, or match the accent color. 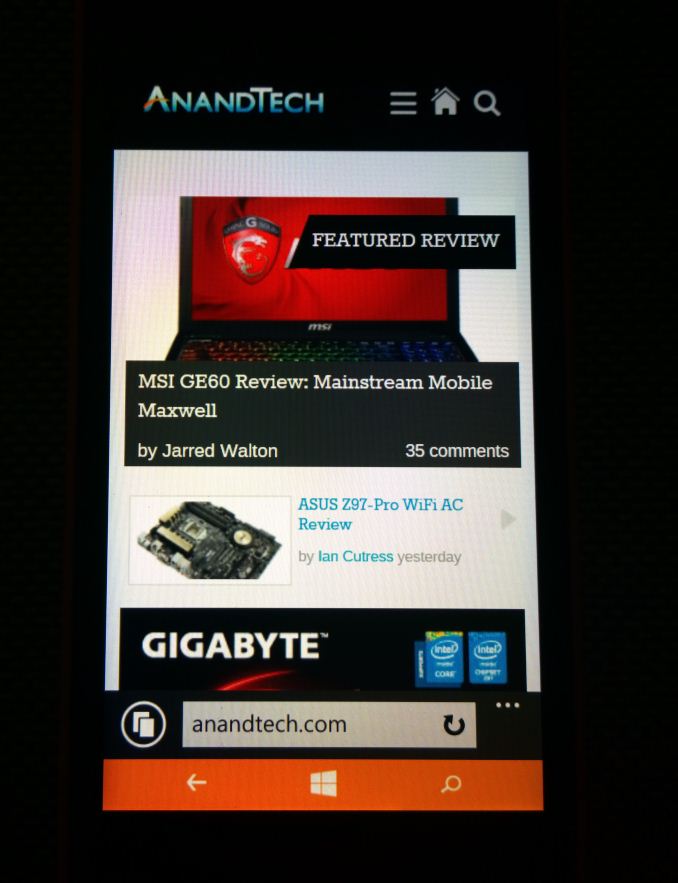 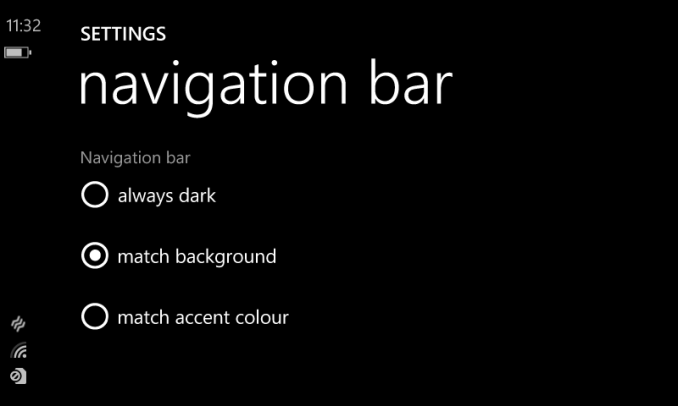 The one thing I do miss though is the camera button, and perhaps that’s because Windows Phone 8.1 isn’t ready to give this button up yet. There’s no easy way to access the camera from the lock screen like on competing operating systems, and with other Windows Phones that’s not an issue because of the physical button to launch the camera. The workaround on this device is that one of the quick action buttons in the action center is set to the camera function out of the box. It is not the ideal fix, and I hope they add a slide right for camera experience to the start and lock screens in a future update to address this issue.

As far as the specifications, the Lumia 630 is also the first Windows Phone to sport the Snapdragon 400 class of SoC. This brings the MSM8226 model which is a quad-core Cortex A7 CPU at 1.2 GHz, Adreno 305 Graphics, integrated modem, and improved ISP over the Snapdragon S4 of the previous generation. Also in-line with the Lumia 520 and 620 is the 512 MB of RAM which is a shame in 2014. Windows Phone as an OS gets by just fine with 512 MB of RAM, but many games in the store are limited to devices with at least 1 GB of RAM, so it would have been nice to see the 630 include the 1 GB to open the device to all apps in the store. The full specifications are listed below.

There’s not too many surprises here. Wi-Fi is 802.11n and not ac, the 630 doesn’t have LTE (although the 635 does for a bit more money) and the camera is decidedly low end. 8 GB of NAND may seem low, but to get to this price it’s not unexpected. You can add up to 128 GB of storage via microSD though, and Windows Phone 8.1 now allows apps to be installed on the SD card, so storage isn’t really an issue.