The Lumia 930 packs a 5” 1920x1080 resolution AMOLED display into its chassis. As seems to be the norm for higher resolution AMOLED, the Lumia 930 uses a RGBG Pentile matrix. AMOLED seems to have a lot more issues with color reproduction than most LCD displays, but the recent showing from Samsung with the Galaxy S5 and especially the Galaxy S5 LTE-A model have proven that an accurate AMOLED display can be done. The question is if it was done in this case. As display quality is one thing that can still differentiate one device from another, it is an important point. No part of a smartphone is used more than the display.

The latest Lumia devices with the Nokia “Cyan” firmware offer more customization of display settings than ever before, with fully adjustable brightness, and the ability to adjust color temperature, tint, and saturation. This is a huge step forward, but the hope is that the display can be accurate out of the box as well.

Like the Lumia 630 we recently looked at, the Lumia 930 also supports Nokia’s ClearBlack technology for better outdoor viewing and better black levels due to a reduction in reflections in the display layers. In addition, the device has Corning Gorilla Glass 3, a high brightness mode for outdoor viewing, and a second enhancement for outdoor viewing which Nokia calls “Sunlight readability enhancements” and is a method of performing content-adaptive backlight control (CABC) to adjust the perceived brightness of an image, but rather than doing full-frame CABC which is the common method of doing this, Nokia’s implementation utilizes Assertive Display technology from Apical. Rather than perform the CABC on an entire image, Assertive Display performs the adjustment on a per-pixel level. This can dramatically increase the usability of a display in bright sunlight and it does so without necessarily using more display power. Below is a sample of the Lumia 930 with the feature both on and off. 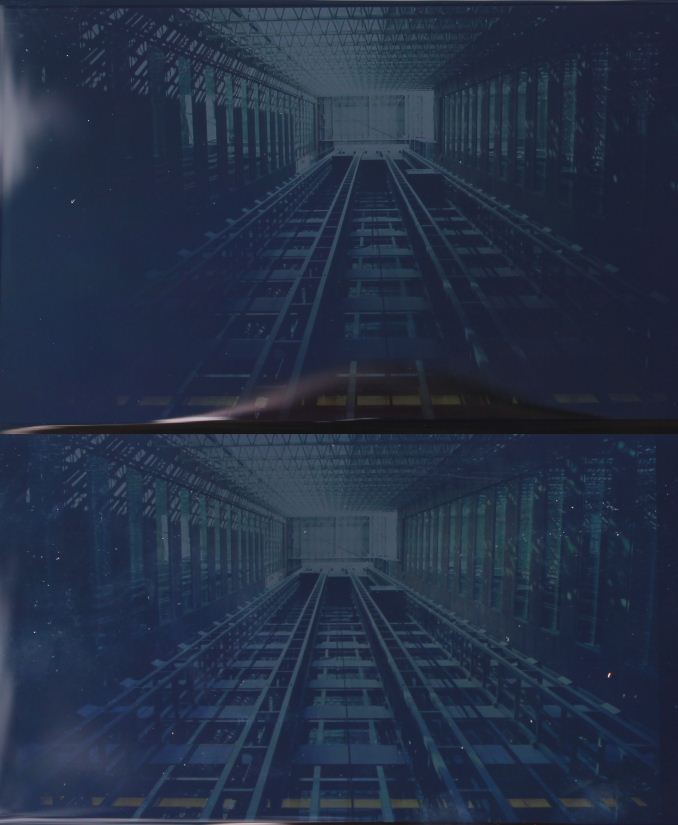 Sunlight Readbility Off (upper picture) vs On (lower picture)

This photo is somewhat of a worst case scenario, with a very dark image outside under the full sun. The bottom image is with the Sunlight Readability Mode enabled, and you can see that more of the image is visible. 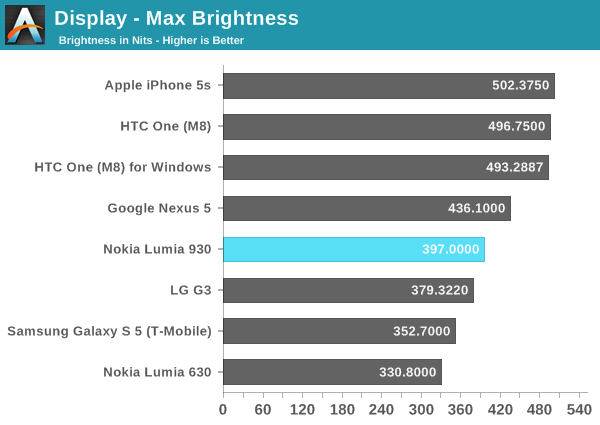 The maximum brightness is very good for an AMOLED device at around 400 nits. Other 1080p AMOLED displays include the Galaxy S5, which only comes in at 350 nits. The maximum output was achieved in the outdoor viewing mode, with normal brightness levels kept much lower. It is a good result for this type of display and certainly helps with the phone being able to be used outdoors. 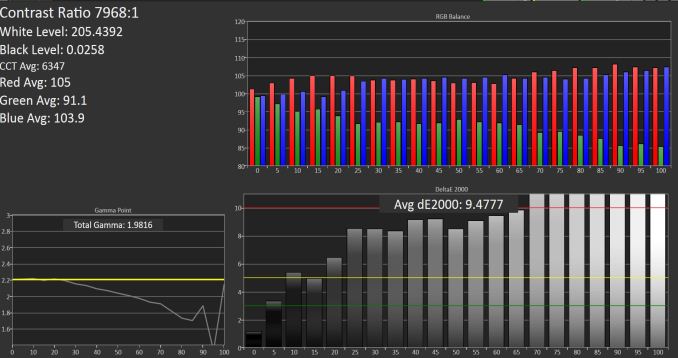 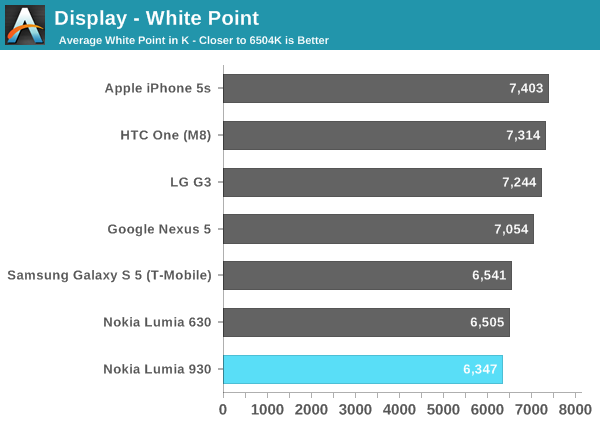 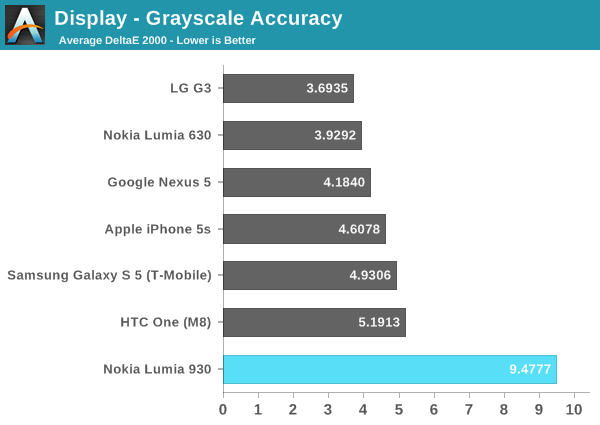 Now we can start to see some issues with the Nokia’s implementation of this AMOLED display. White Point is pretty good at 6347. What is missing though is green, which starts to drop off almost immediately after 5 to 10% white level, and then continues to fall right up until 100%. This leads to a grayscale average dE2000 of 9.4777 with the upper scores causing most of the issues. The grayscale almost perfectly follows an inverse of the green levels in the overall image. 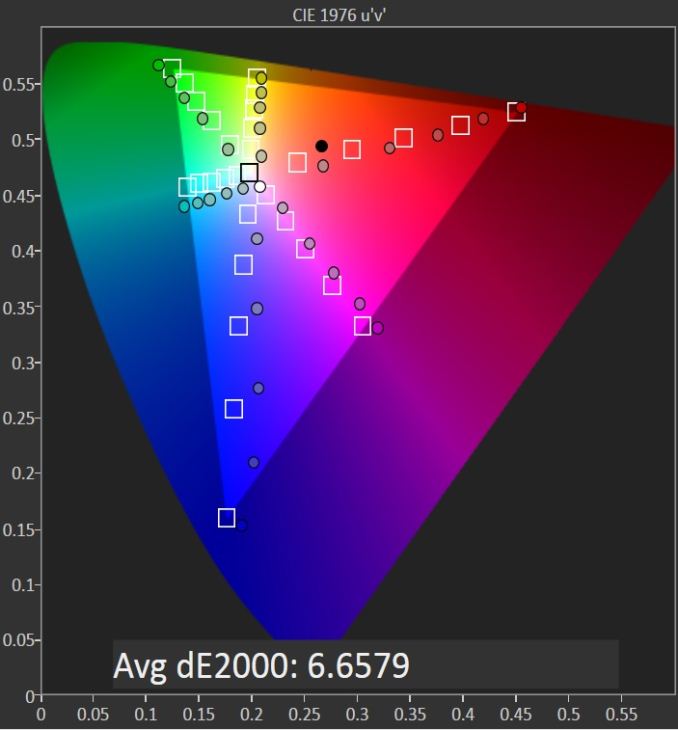 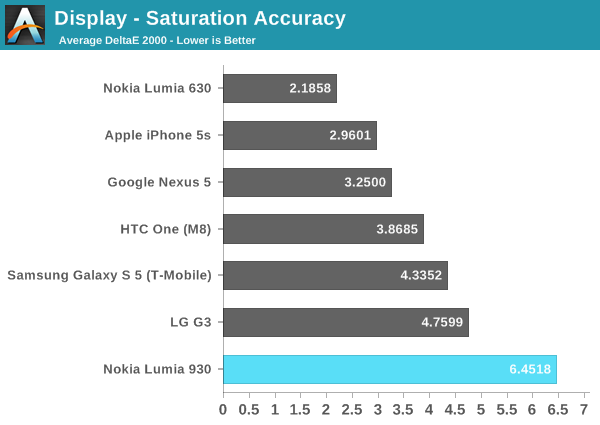 Saturation accuracy is also not fantastic, with a dE2000 average of 6.6579. It is not helped either with the grayscale being so far off, which really pulls this score up. But regardless of grayscale, the saturation sweeps show all of the colors are off. 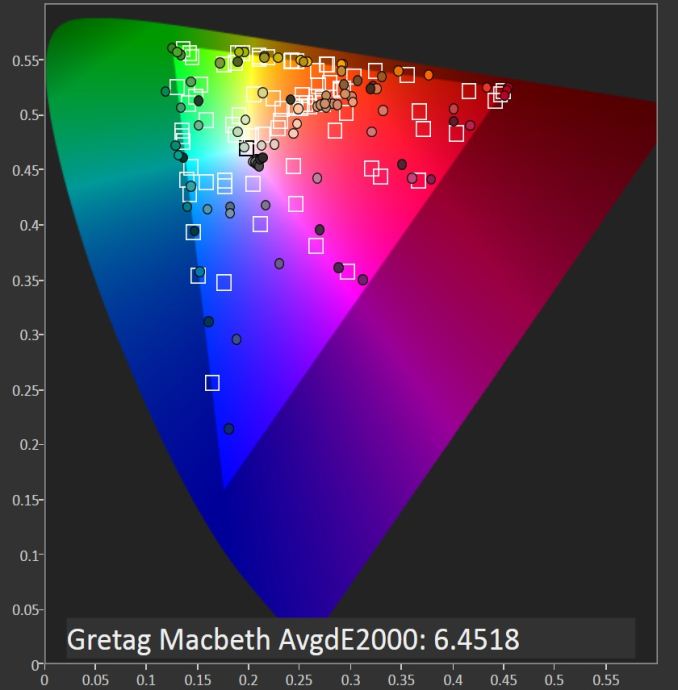 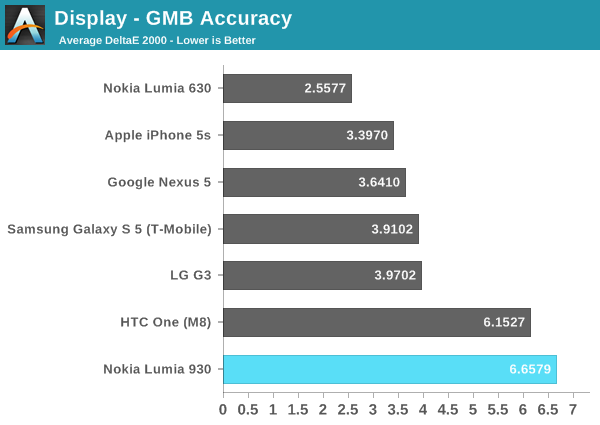 Like the saturation sweeps, the Gretag Macbeth color checker also has a dE2000 average of over 6, which is not great. There is really nothing here to focus in on as being well done. Out of the box, there is clearly no effort put in to calibrate the display at the factory which is a shame because other competitors are putting this effort in.

As part of the Nokia firmware updates, we can finally adjust the individual aspects of the display now. Not only can brightness be adjusted on a slider, but color temperature can be adjusted from warm to cool, tint can be adjusted from green to purple, and color saturation can be adjusted from neutral to vivid. This allows us to compensate for the lack of green and try to get the display into a much more accurate mode. While not a true color management system, it is certainly better than no options, or just generic options like “cinema mode” or other such methods of changing the profile of the display.

I performed some adjustments of the tint in order to pull the green values up, and the results were much better. While the white point was increased to 7006, the green values averaged much closer to 100 with this adjustment. Grayscale was still not perfect at 4.03, but it was much better than the initial results of 9.477. Saturation accuracy improved dramatically to 3.6781, and the Gretag Macbeth came all the way down to 3.075 which is right in line with the upper boundary of what you would consider a good display. 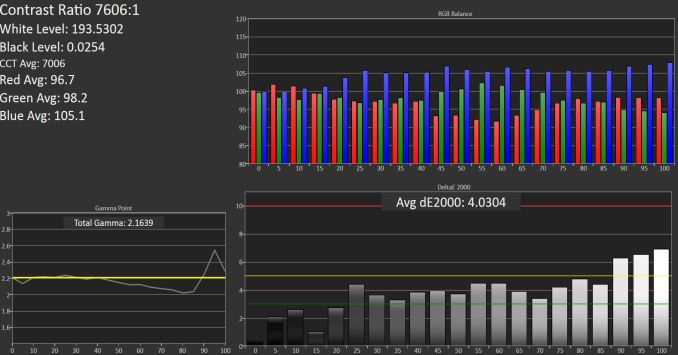 The disappointing part is that the display wasn’t dialed in out of the box. Clearly with not much effort, Nokia could have made this display more accurate because a simple tint adjustment brought the numbers way lower.

Overall, the display is a mixed bag. 1080p on a 5” screen means 441 pixels per inch, which is good. The pentile RGBG subpixel layout does not appear to be an issue once the pixels per inch get high enough.  Images are very sharp and crisp, and the larger size works well with Windows Phone and gives you access to more tiles on your home screen without having to scroll. I have always like AMOLED on Windows Phone, because the operating system lends itself well to high contrast and good black levels, with AMOLED displays really shining with their true blacks. Unfortunately the color accuracy is quite poor though, and while it can be adjusted, it is too bad that it does not get any sort of calibration at the factory like some of the other flagship devices now.