The high-end 802.11ac router market has seen two introductions in the recent past. The first was the Netgear Nighthawk X6 which was based on the Broadcom 5G Wi-Fi XStream platform with two discrete 3x3 802.11ac radios. On the other side, we had Asus introduce the first Wave 2 router in the RT-AC87 using the same Broadcom SoC and 2.4 GHz radios as the Nighthawk X6, but choosing the Quantenna Wave 2 solution for the 5 GHz band. In the launch coverage of the RT-AC87, we had mentioned the online leaks of the Netgear Nighthawk X4 router. Today, Netgear is providing us the official details.

In terms of the configuration of the radios, the Netgear Nighthawk X4 and the Asus RT-AC87 are equivalent. Both of them belong to the AC2350 / AC2400 class, i.e, four 5 GHz (802.11ac) radios (4x 433 Mbps) and three 2.4 GHz (802.11n) radios (3x 200 Mbps) for a net aggregate of 2.333 Gbps. We have already touched upon all the advantages of the Quantenna Wave 2 solution over the current solutions from Broadcom and Qualcomm Atheros. In essence, the 4x4 update (quad-stream Wi-Fi) provides faster Wi-Fi throughput, enables more stable and jitter-free video streaming and provides more robust Wi-Fi connection for a larger number of devices.

There are two internal hardware aspects in which the Nighthawk X4 differs from the Asus RT-AC87: 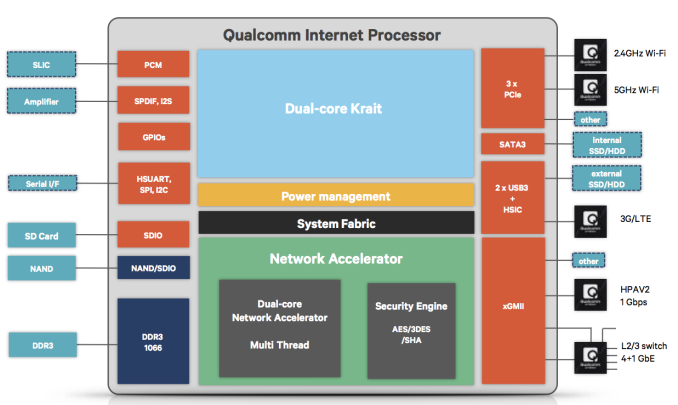 While the IPQ8604 does have GMII interfaces, Netgear decided to use the PCIe ports to make sure that they were able to make full use of the radio's capabilities to go beyond 1 Gbps in each direction. The radios also have offloading processors running at 500 MHz to enable the main SoC to devote CPU cycles for other functions (storage, VPN etc.)

Coming back to the R7500, Netgear touts dynamic QoS as one of the main features. The router has a list of devices / apps (which can be updated independent of the firmware) which enables allocation of bandwidth based on the application. The goal is to ensure that latency sensitive apps get the highest priority while also making sure that the lowest priority apps don't get choked off. Netgear also claims to have put in special hooks for video streaming sites to prevent buffering while accessing adaptive bitrate sites (such as Netflix) at the same time as the non-adaptive ones (such as YouTube). Plans are also in-place to support the R7500 on myopenrouter.com.

Netgear plans to carry all three Nighthawk versions in the market for now, as they target different segments. The positioning and key points of the three members are reproduced in the slide below.

The R7500 Nighthawk X4 is priced at $280 which closely tracks the Asus RT-AC87 pricing. It will be an interesting tussle in the market between the two, as Asus will also bring the Broadcom XStream solution demonstrated at Computex to the market soon.