Back in September we reviewed the FX-8370E, a new AMD CPU based on the older Vishera/Piledriver architecture but at a lower power – 95W rather than 125W. This was achieved by a combination of a mature 32nm process, adjusting clock speeds and (potentially) some specifically binned voltage characteristics. The FX-8320E was the other lower power CPU launched that day, which AMD has now been supplying for reviews.

Part of the world yearns for a new high performance processor from AMD to tackle the market. While Team Blue’s tick-tock model accounts for some of their aggressive product development, the limited success of the Bulldozer architecture put AMD on the back foot. In principle the basic design was a good idea, but the ecosystem to support it was not ready and it was almost left behind by those that focused on the platform metrics already at hand. I say almost, because AMD repositioned their high end product stack based on price to aim to compete on performance, albeit focused on the more mid-range but higher volume market segments, and AMD has not made a new high-end processor based on a new architecture in over two years.

This Vishera platform is based on the Bulldozer-based Piledriver architecture and the 32nm process, but has still produced a number of new models since first launch, including the 220W FX-9000 series coming to retail earlier in 2014 (read our review of the FX-9590 here) and a set of new processors in September 2014. This included the 125W FX-8370, positioned at the top of the FX-8000 range with clock speed increases, and the 95W ‘E’ processors, the FX-8370E and FX-8320E. 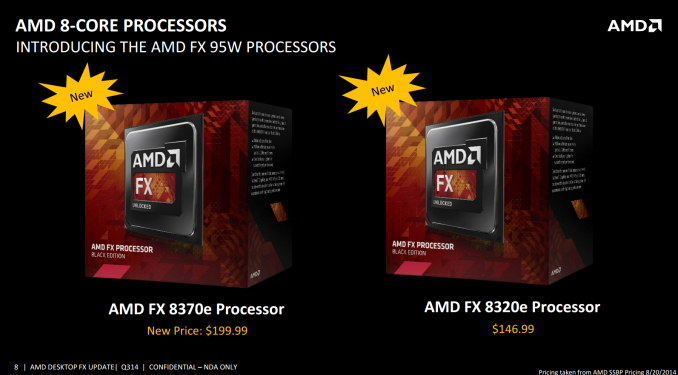 These processors are similar to their non-E counterparts, the FX-8370 and FX-8320, but with a lower base frequency but the same turbo frequency. This means, in theory, they should be as quick and responsive for most day-to-day tasks as their 125W brethren, but a bit behind when it comes to the hardcore processor mechanics. While priced the same as the 125W parts, AMD is hoping that the rated TDP reduction will entice users who might not need the full power all the time. 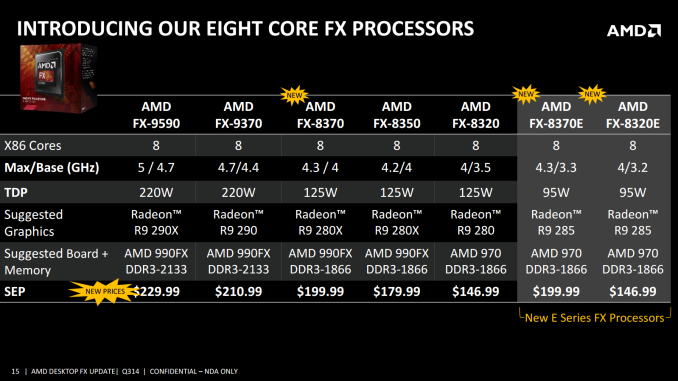 Due to the adjustment of TDP, these processors are also more aimed at the 970 chipset. This is a chipset that uses fewer GPU lanes (one PCIe 2.0 x16 slot, one PCIe 2.0 x4 slot) and is slightly cheaper than the 990FX range. Typically the newer 990FX boards are designed to take the large 220W behemoths from the FX-9000 list, but by using a 970 the motherboard makers can focus on 125W max and hopefully save the customer some money. As a result of this target, AMD also sampled the (anecdotally) most popular 970 board, the MSI 970 Gaming, which we have prepared for a separate review. 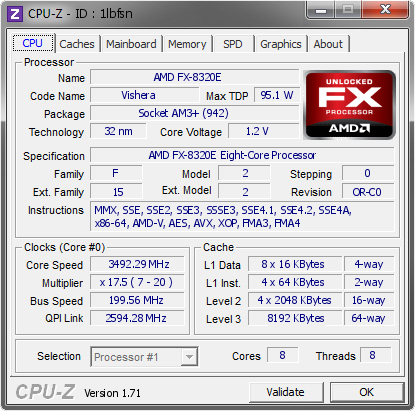 Because the following question comes up repeatedly when coming across the latest in the FX line, I will copy the answer verbatim from our previous FX-8370E review:

“Why update the FX line with more Vishera based processors? Can’t we get an update?

AMD’s reasoning for these new processors, apart from the slowly increasing yields of the higher bin parts over the past year and tweaking the overall design, is because of the motherboards available on the market. Due to the construction of some of the early motherboards intended for AMD’s non­-IGP line, these early motherboards could only support 95W or 125W maximum, let alone the 220W of the FX­9590/9370 behemoths. By releasing an 8-­thread Vishera processor with a 95W TDP, this allows these users to upgrade without spending an extra $120­$200 on a new motherboard.”

With regards the old roadmap from AMD, it still looks bleak when we consider the FX CPUs. There is no named successor to Vishera, not even on the 28nm process used for the latest Kaveri APUs: 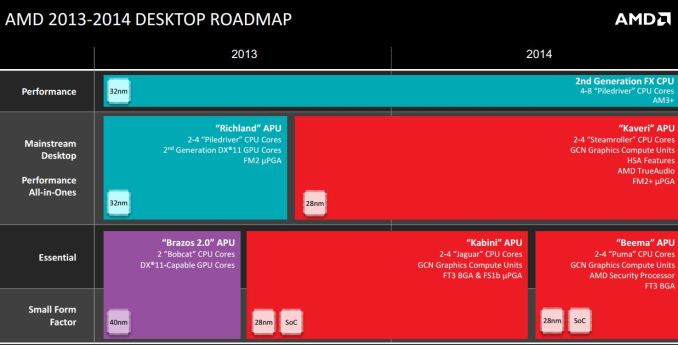 With the Excavator branded APUs due out at some point in the future, part of me hopes that AMD will release something on the FX line kin to that, but it might have the same issue as the Piledriver/Vishera units in the sense that power consumption spirals upward moving beyond 3.5 GHz without severe binning. The 28nm process was designed more for transistor density, especially when we consider the size of the integrated graphics AMD likes to use on the APUs, so there is debate from AMD's side that if a new FX release would offer much on the CPU side, except higher costs.

AMD stated for our FX-8370E review that ‘The AMD of today is funding the AMD of tomorrow … to ensure the ongoing success of products like FX’. Products like FX. It doesn’t give me hope. With AMD’s Jim Keller being the driving force behind Zen, the pin-compatible x86/ARM processors scheduled for 2016 and as noted in a round table talk, ‘scaling from tablet to desktop’, this is the barrier on the horizon that will focus AMD. But for now, we have 95W Vishera to play with, and our sample was a beast.

The CPU, The Chipset and The DRAM

Straight up, 32nm is up against the wall. Intel is on 14nm, recently releasing both Broadwell-Y (Core M) and Broadwell-U, with the latter up to 28W. This represents Intel’s second generation FinFET technology, and if we recall 32nm was back with Sandy Bridge. That being said, the longer you spend on a process node, the more optimized it can be made and the yields improved. One could argue that this reduces running costs, allowing AMD to get product into the market. The question still remains if it is the right product.

From the chipset perspective, AM3+ motherboards come in with either 990FX, 990X or 970 and a choice of two 900 series south bridges. The most common and talked about by far is the 990FX+SB950 combination offering two PCIe 2.0 x16 slots for both CrossFire and SLI, and if you want to splash the cash there are a couple of PLX8747 enabled motherboards that use inter-GPU PCIe 3.0 communication and afford more than two-way setups. However, no matter which way the segment is sliced, there are relatively few new motherboards on the market. Almost all are at least twelve months old, with a select few more recent. We recently reviewed the ASRock 990FX Extreme9 which sits at the top of ASRock’s product stack, but they also released a 990FX Killer with an M.2 SATA slot. ASUS had the 990FX Sabertooth PCIe 3.0 model, or the ROG Crosshair V Formula-Z both at the top of the ranges. MSI’s 970 Gaming has been the talk of the town in recent months, offering a poignant target from them. GIGABYTE has not released a 990FX or 970 Sniper yet, although if the market wants it be sure to let them know.

On a functionality front, the 900 series chipsets suffer from a lack of native USB 3.0, requiring controllers to implement this which can be slower than a native solution. For example the MSI 970 Gaming uses two VLI controllers to give a total of 4 USB 3.0 ports, although the performance is not the best. This typically also adds cost of the controllers to the product, which is something to avoid on a bargain model. On the plus side AMD does have six native SATA 6 Gbps ports, all suitable for RAID. 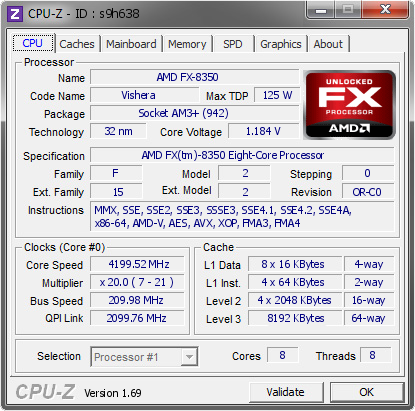