I commented on the previous page that performance can at times feel lacking with the Chromebook 13. I think a large part of that comes from the NVIDIA Tegra K1 SoC, unfortunately. I’ve used an NVIDIA SHIELD, and going from an 8-inch tablet to a 13.3-inch laptop you’d think maybe they could push performance a bit more, but in most cases it’s a wash. Being a Chromebook (laptop), however, most sites will default to a heavier non-mobile view that can take a bit longer to fully process and display, and interactions with the laptop during this time can be very sluggish.

Benchmarks alone don’t necessarily convey the complete performance experience, so let me preface this section by saying that the older C720 was clearly more responsive in certain workloads. If you’ve never used the C720 then the Chromebook 13 won’t necessarily feel too slow, but switching between the two – or running tests simultaneously on both laptops – shows that while TK1 is more power friendly, the Haswell Celeron ends up being faster in nearly every computational workload. Even graphics doesn’t generally favor TK1, though the difference in screen resolution certainly plays a role as the C720 was only available with a 1366x768 panel.

For our performance testing of Chromebooks, we end up using a lot of tests that we run on tablets as there aren’t many Chromebook benchmarks. Also keep in mind that some of our Chromebook results are quite old (relatively speaking), so while we are running the latest build of Chrome OS on the C720 and CB13, the other Chromebooks were tested more than a year ago. We also aren’t able to test the older models on newer benchmarks, so some of our charts only have a few results. With that out of the way, here’s a quick look at performance. 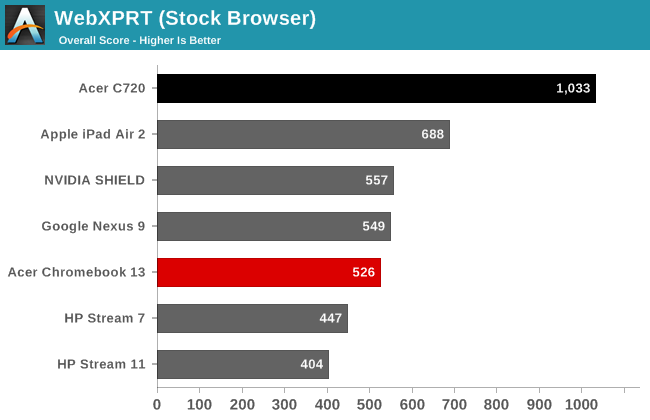 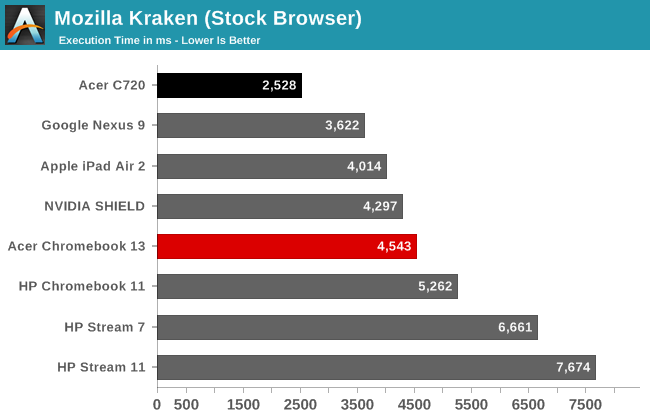 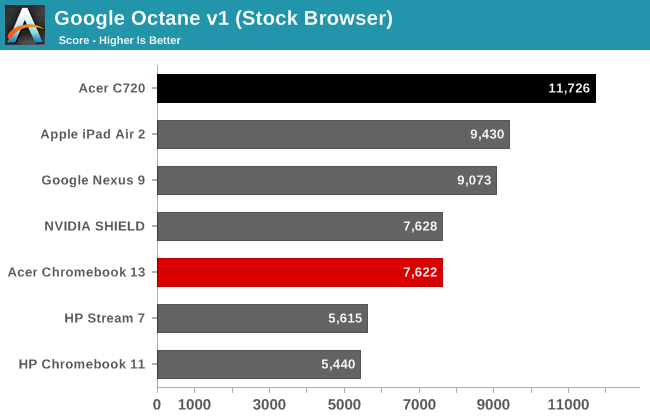 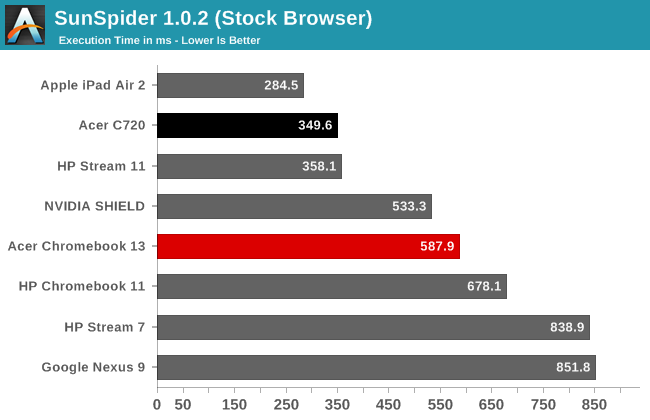 And there’s the rub: no matter how much NVIDIA might like to say otherwise, when it comes to competing with Intel’s Core architecture there’s still a huge performance gap on the CPU side of the fence. If we were talking about a 10-20% difference, you could say I’m splitting hairs, but the C720 is well over 50% faster in all the non-graphics workloads, and in a few cases it’s close to twice as fast. Given we’re not even talking about particularly speedy processors to begin with – the Celeron 2955U is literally Intel’s “slowest” Haswell processor – a 50-100% improvement in performance is something you will notice.

Just typing in Google Docs – or heaven forbid, Microsoft’s Office 365 Word online, which can feel a bit like a pig even on a fast desktop PC – the experience can be anywhere from a bit laggy on the Chromebook 13 to downright slow. Open up a long Reddit page or other complex website and again performance starts to matter. I’m enough of a power user to appreciate added performance, even on a budget Chromebook, and the upcoming Chromebook 15 will certainly be interesting to look at.

Also of interest is the WiFi performance testing. Using my 3x3 802.11ac router and a 5GHz connection for both Chromebooks (though the C720 is only 802.11n), the two Chromebooks end up delivering pretty similar WiFi results. The Chromebook 13 is technically faster with its 1x1 802.11ac adapter, but while that should in theory allow well over 200Mbps of real-world throughput, in testing it topped out at 115Mbps. The C720 on the other hand manages 100Mbps; I'm not sure if it has a 2x2 or 1x1 802.11n adapter, but the net result is a relatively small difference in throughput.

With all this talk of performance, it’s important to take a step back again and ask the question: what are you going to do on your Chromebook? For every task that I might run that can push the performance limitations a bit, there are plenty of options where a Chromebook works fine. Both the C720 and the CB13 handled 1080p YouTube videos without a problem, and if you want to store an MP4 video locally they also handle that fine. For everyday Gmail (or other web mail) and Internet surfing, the Chromebook 13 is definitely good enough. And again, the keyboard just has a good feel to it, so as I write this review I may at times want to switch to my desktop, but that’s only because I prefer the desktop version of Word to Google Docs, not because of the typing experience.