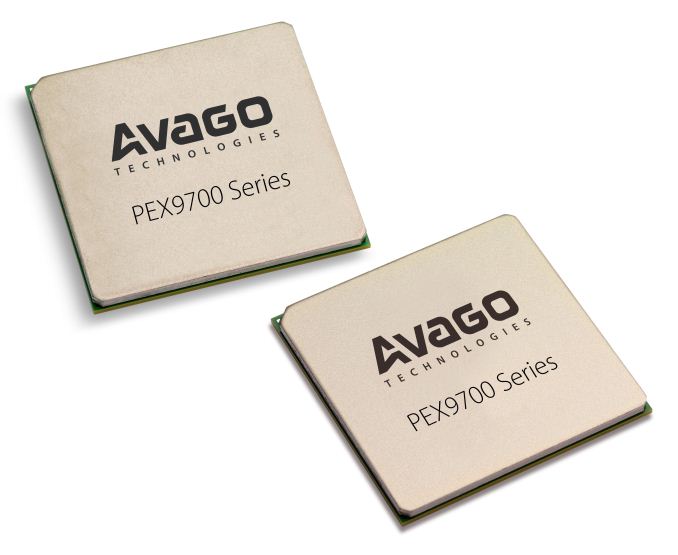 One of the benefits of PCIe switches is that they are designed to be essentially transparent. In the consumer space, I would wager that 99% of the users do not even know if their system has one, let alone what it does or how it uses it. In most instances, PCIe switches help balance multiple PCIe configurations when a CPU and chipset supports multiple devices. More advanced situations might include multiplexing out PCIe lanes into multiple ports, allowing more devices to be used and expanding the limitations of the design. For example, the PEX8608 found in the ASRock C2750D4I which splits one PCIe x4 into four PCIe x1 lanes, allowing for four controllers as end points rather than just the one. Or back in 2012 we did a deep dive on the PLX8747 which splits 8 or 16 PCIe lanes into 32, through the use of a FIFO buffer and a mux, to allow for x8/x8/x8/x8 PCIe arrangements – the 8747 is still in use today in products like the ASRock X99 Extreme11 which uses two or the X99 WS-E/10G which has one.

Today’s announcement is from Avago, the company that purchased PLX back in June 2014, for a new range of PCIe switches focused on the data center and racks called the PEX9700 series. Part of the iterative improvements in PCIe switches should ultimately be latency and bandwidth, but there are several other features worth noting which from the outside might not be considered, such as the creation of a switching fabric.

Typically the PCIe switches we encounter in the consumer space use one upstream host to several downstream ports, and each port can have a series of PCIe lanes as bandwidth (so 4 ports can total 16 lanes, etc). This means there is one CPU host by which the PCIe switch can send the work from the downstream ports. The PLX9700 series is designed to communicate with several hosts at once, up to 24 at a time, allowing direct PCIe to PCIe communication, direct memory copy from one host to another, or shared downstream ports. Typically PCIe is a host-to-device topology, however the PEX9700 line allows multiple hosts to come together with an embedded DMA engine on each port to probe host memory for efficient transfer. 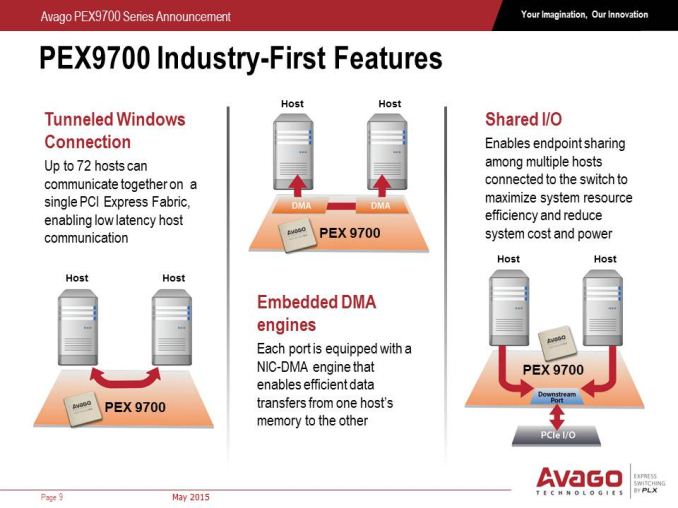 Unlike the previous PCIe switches from PLX, the new series also allows for downstream port isolation or containment, meaning that if one device downstream fails, the switch can isolate the data pathway and disable it until it is replaced. This can also be done manually as the PEX9700 series will also come with a management port which Avago states will use software modules for different control applications. 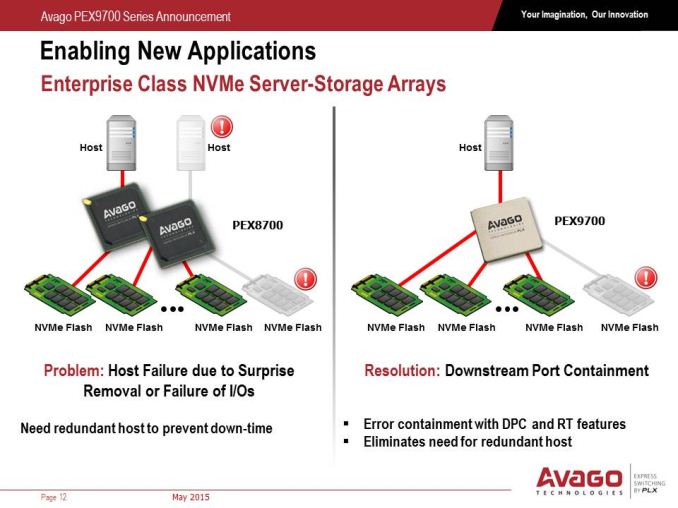 In the datacenter and within rack infrastructure, redundancy is a key feature to consider. As the PEX9700 switches allow host-to-host communication, it also allows control from multiple hosts, allowing one host to take over in the event of failure. The switches can also agglomerate and talk to each other, allowing for multiple execution routes especially with shared IO devices or in multiple socket systems for GPGPU use. Each switch will also have a level of hot-plugging and redundancy, allowing disabled devices to be removed, replaced and restarted. When it comes to IO, read requests mid-flow are fed back to the host as information on failed attempts, allowing instant reattempts when a replacement device is placed back into the system. 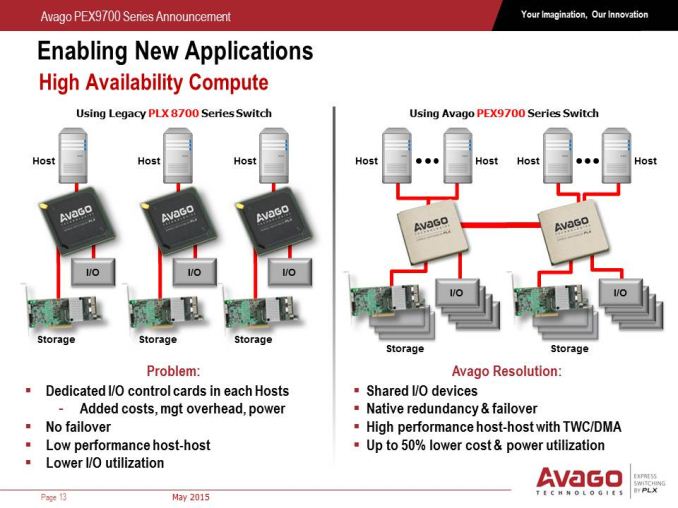 Avago is stating that the 9700 series will have seven products ranging from 5 to 24 ports (plus one for a management port) from 12 to 97 lanes. This also includes hot plug capability, tunneled connections, clock isolation and as mentioned before, downstream port isolation. These models are currently in full scale production, as per today’s announcement, using TSMC's 40nm process. In a briefing call today with Akber Kazmi, the Senior Product Line Manager for the PEX9700 series, he stated that validation of the designs took the best part of eight months, but that relevant tier one customers already have their hands on the silicon to develop their platforms.

For a lot of home users, this doesn’t mean that much. We might see one of these switches in a future consumer motherboard focused on dual-socket GPGPU, but the heart of these features lies in the ability to have multiple nodes access data quickly within a specific framework without having to invest in expensive technologies such as Infiniband. Avago is stating a 150ns latency per hop, with bandwidth limited ultimately by the upstream data path – the PCIe switch ultimately moves the bandwidth around to where it is most needed depending on downstream demand. The PEX9700 switches also allow for direct daisy chaining or as a cascading architecture through a backplane, reducing costs of big switches and allowing for a peak bandwidth between two switches of a full PCIe 3.0 x16 interface, allowing scaling up to 128 Gbps (minus overhead).

Personally, the GPGPU situation interests me a lot. When we have a dual socket system with each socket feeding multiple GPUs, with one PEX9700 switch per CPU (in this case, PEX9797) but interconnected, it allows GPUs on one socket to talk to GPUs on the other without having to go all the way back up to the CPU and across the QPI bus, which saves both latency and bandwidth, and each of the PCIe switches can be controlled. 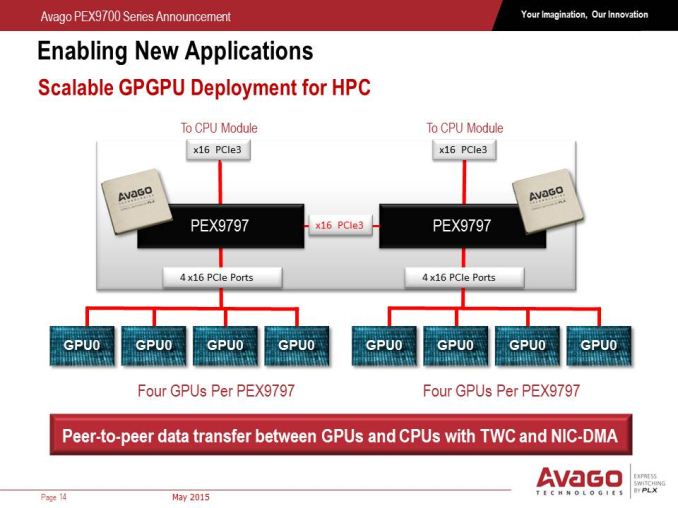 The PEX9700 series of switches bucks the status quo of requiring translation layers such as NICs or Infiniband for host-to-host-to-device communication and all inbetween, which is what Avago is hoping the product stack will accomplish. The main factors that Avago see the benefit include latency (fewer translation layers for communication), cost (scales up to 128 Gbps minus overhead), power (one PEX9700 chip has a 3W-25W power rating) and energy cost savings on top of that. On paper at least, the capabilities of the new range could potentially be disruptive. Hopefully we'll get to see one in the flesh at Computex from Avago's partners, and we'll update you when we do.