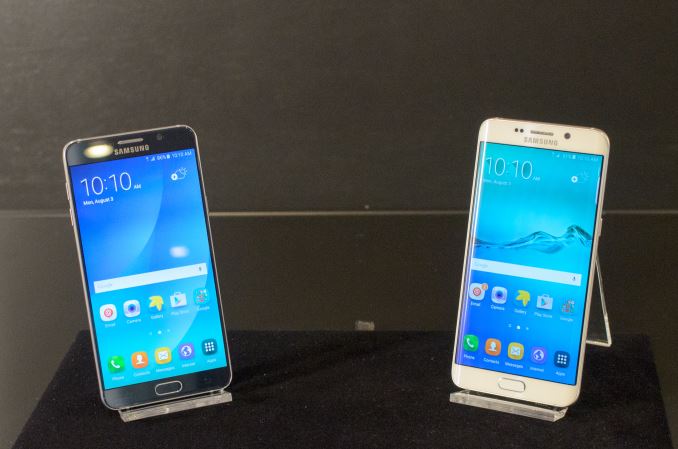 Today, Samsung is announcing the next generation of their Galaxy-brand phablets, the Galaxy Note 5 and the Galaxy S6 edge+. Samsung’s phablets have been one of their greatest smartphone success stories, finding traction in a market when many thought there wouldn’t be a place for such a large phone. And while you will never see some competitors directly admit to it, products like the Note series have legitimized the phablet form factor and required that the competition catch up as well, making the phablet form factor as much of a home court for Samsung as there can be.

Starting with their 2014 models, Samsung introduced two different phablets, the Galaxy Note 4 and the simply titled Galaxy Note Edge. This year Samsung is retaining the dual phablet approach, however in the case of the Edge product Samsung has shifted gears on what they want to do. For 2015 Samsung seems to be going after a new audience in the form of the Galaxy S6 edge+, which is a more distinct derivative of the Note 5 platform with some greater feature changes than just a curved screen. To try and explain what I mean, I’ve included the specs below.

As one can see, the Galaxy Note 5 and Galaxy S6 edge+ share a lot in common. They have the same SoC, same amount of DRAM, almost identical displays, the same cameras, fingerprint scanners, and the same battery. Ultimately what differs between the two devices is not the underlying hardware, but the functionality and form factor of the devices.

There are really two important differences between the two, namely the removal of the S-Pen and addition of the curved display to the Galaxy S6 edge+. The result is that while the Galaxy Note 5 is a traditional Note phablet, the Galaxy S6 edge+ is closer to a very large Galaxy S6 edge, and this is why these two closely related devices are placed in very different product lines. In some ways, I suspect that this will be a litmus test for the S-Pen functionality in general, as sales may prove Note functionality has a relatively small effect on the desirability of a phablet. 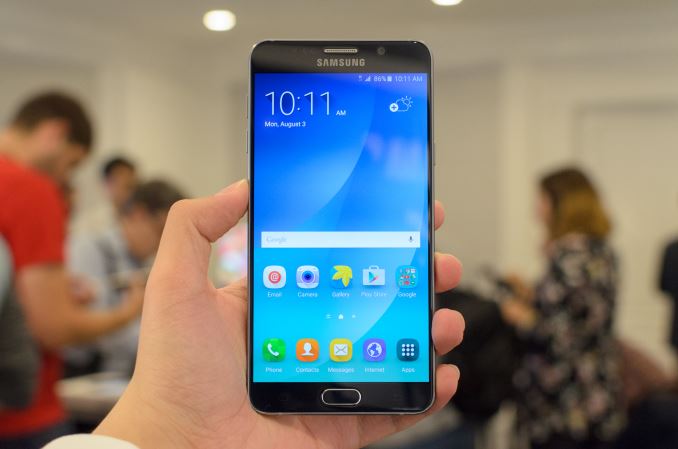 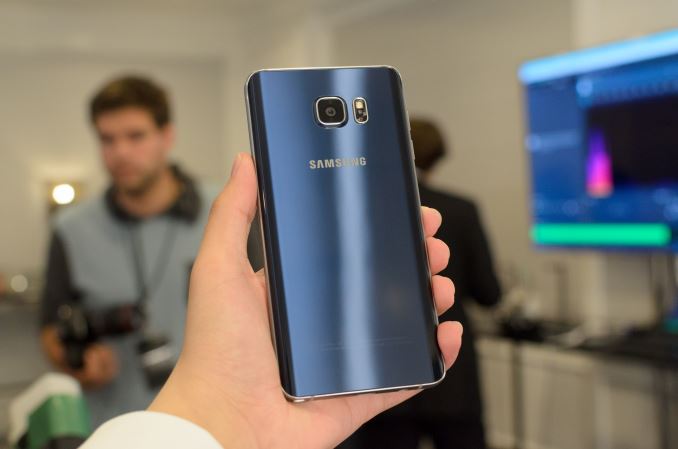 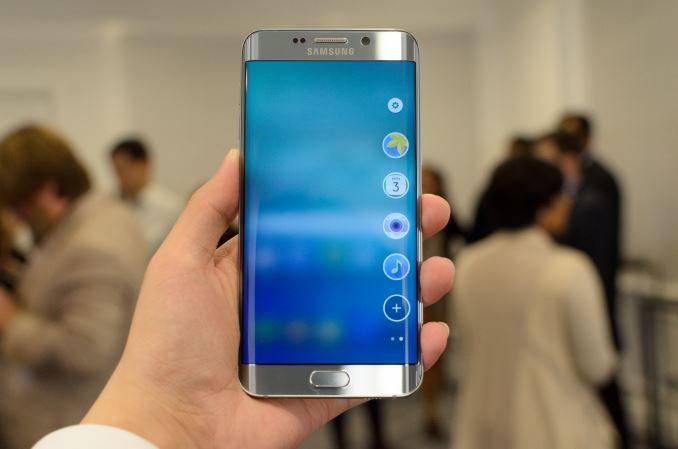 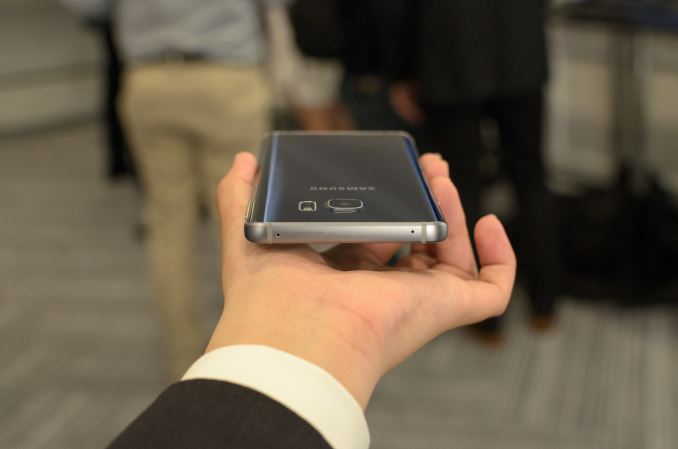 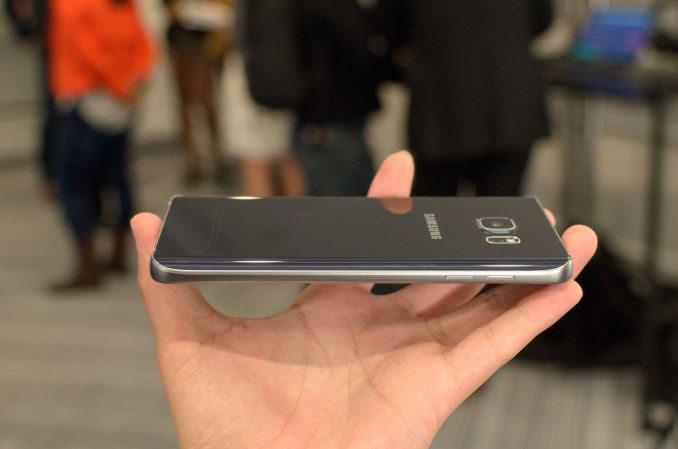 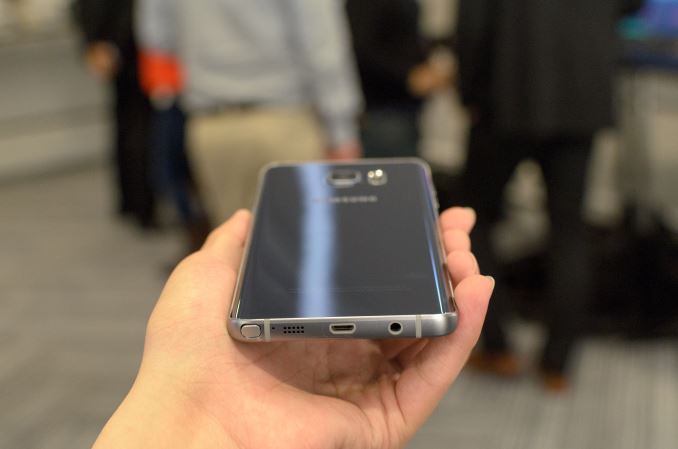 With the Galaxy S6, there was a noticeable distinction between the normal version and the edge variant when it came to in-hand feel as the standard version was significantly thicker on the left and right sides of the phone. With the Galaxy Note 5, this difference is lessened, but the difference in in-hand comfort definitely remains. The big driver for this is the use of 3D glass on the back cover of the Galaxy Note 5, which allows for a more ergonomic design in the hand. I can’t help but compare this to the first phablet that I’ve seen with a 3D glass back cover, namely the Xiaomi Mi Note line, which feels remarkably similar. At any rate, the Note 5 seems to remain more ergonomic than the edge variant, which has a flat back but a curved display. 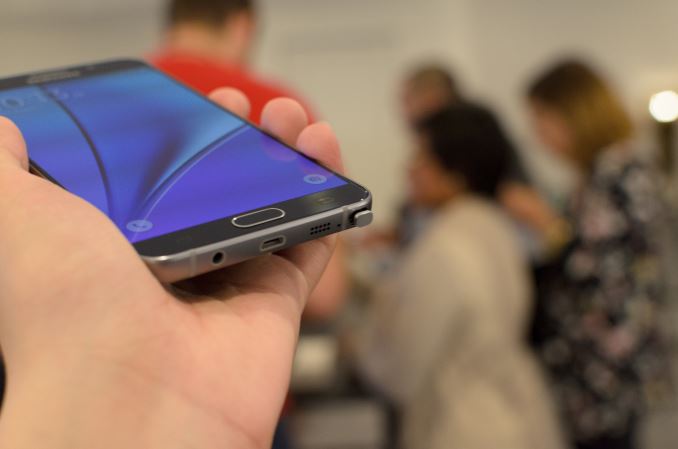 One of the major updates changes to the Galaxy Note 5 is improvements on the S-Pen, which has a number of new changes to the design and software functionality. On the hardware side, the pen itself now has a changed mechanism that has a push button top that allows the pen to be completely flush inside the phone when not in use, but easily ejected by pushing on the top of the pen to make it protrude. The digitizer also has dramatically reduced latency. In my experience, this helps a lot with making writing more natural on the Note 5 as I don’t hesitate as much while waiting for the input to catch up. 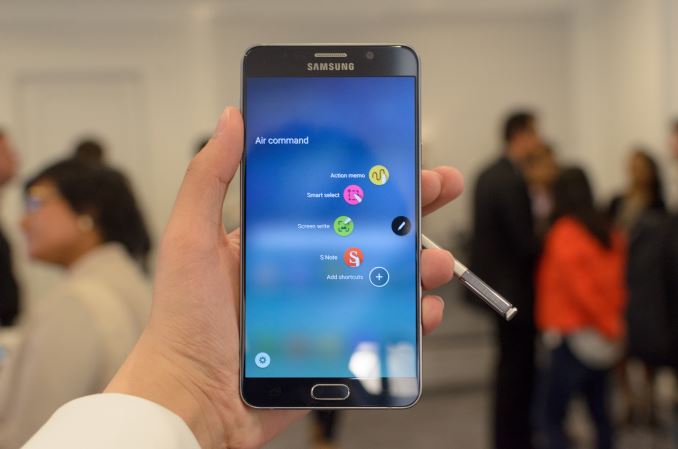 On the software side, Samsung has added a host of notable additions to extend the functionality of the S-Pen, namely PDF annotation, an Air command floating button, customizable shortcuts, and scroll capture. PDF annotation sounds exactly like what you might expect, which is the ability to write directly on a PDF and save the results. This has obvious utility in cases like signing documents, as the user experience involved in digitally signing a document is horrific and usually goes something like printing out a PDF, signing the PDF, and scanning the signed document. In the case of the Note 5, signing a document is pretty much as easy as opening the PDF with the right application, writing a signature with the S-Pen, and saving the changes. 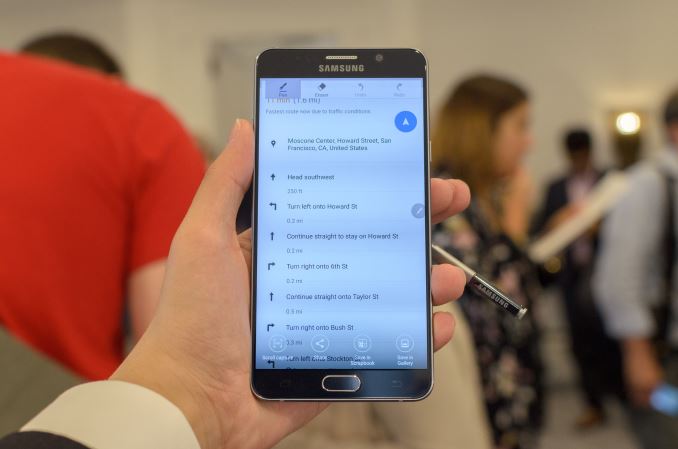 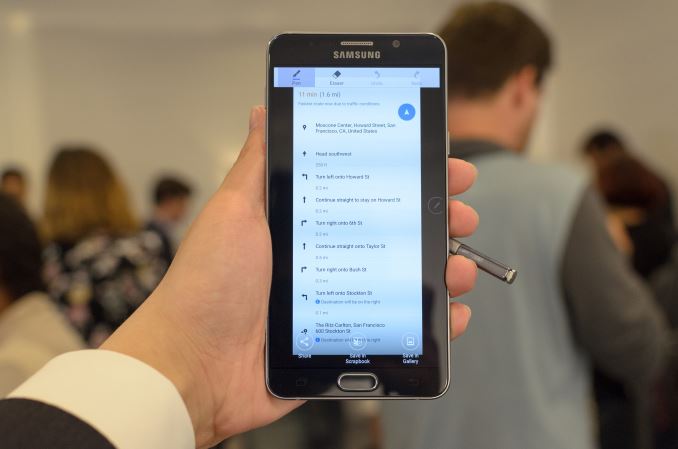 Scroll capture is also arguably a “minor” feature, but I would argue that its value is significant when it comes to improving the user experience of the phone. In short, this screenshot mode makes it possible to screenshot a long list in an entire screenshot, so something like Google Maps directions can be taken as a single scrollable screenshot rather than 2-20 screenshots that might have overlapping information and potentially missing information from the ListView. However, as far as I can tell this capture mode is strangely hidden behind S-Pen functionality when it really should be integrated into the existing screenshot capture gestures that programmatically determines whether to present this scroll capture mode. 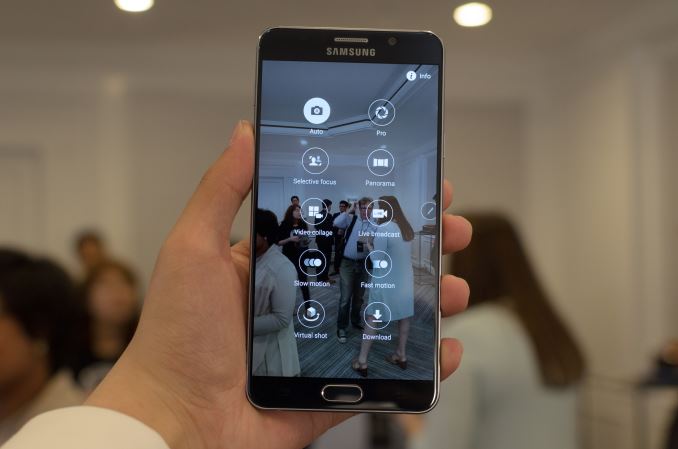 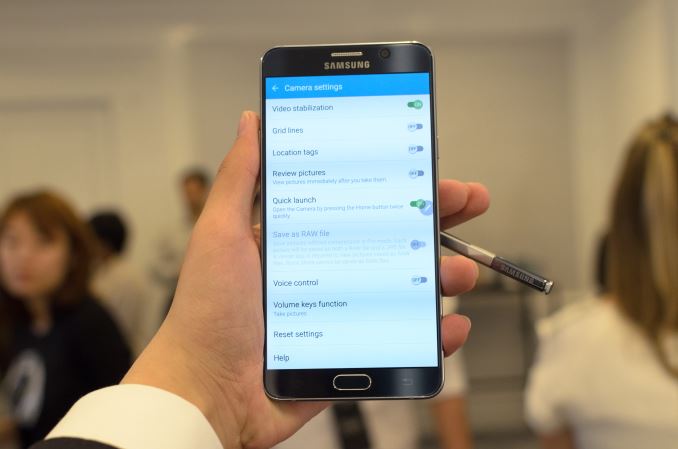 Although the camera configuration is unchanged from the Galaxy S6 with an IMX240 or S5K2P2 camera sensor, f/1.9 optics and a 5MP FFC, there are some new and interesting features present in the camera application. One notable additional is improved pro mode, with extended ISO range down to 50 ISO and the addition of a shutter speed toggle for long exposures. However, manual white balance remains unchanged as far as I can tell with only a few presets rather than fine-grained color temperature adjustments. I was unable to get a RAW sample from the device, but it will be interesting to see if Samsung has properly implemented sensor and lens corrections into the RAW files. 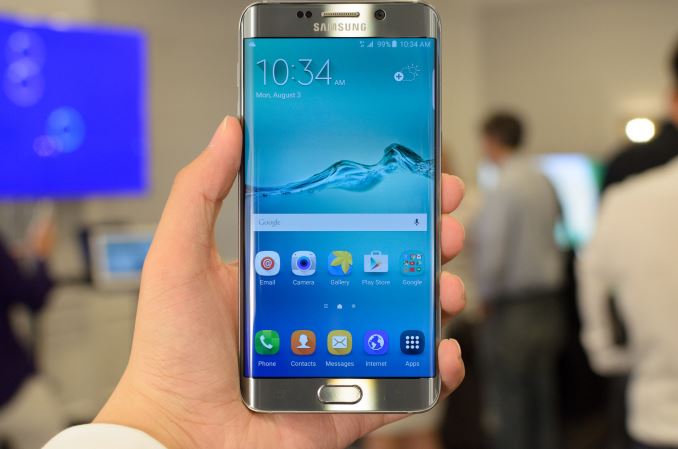 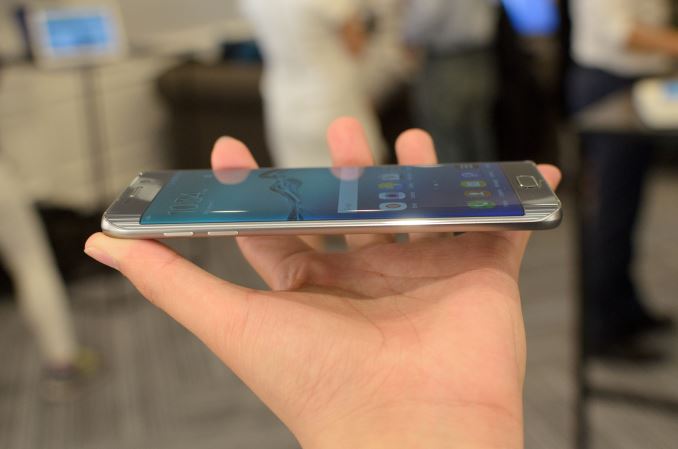 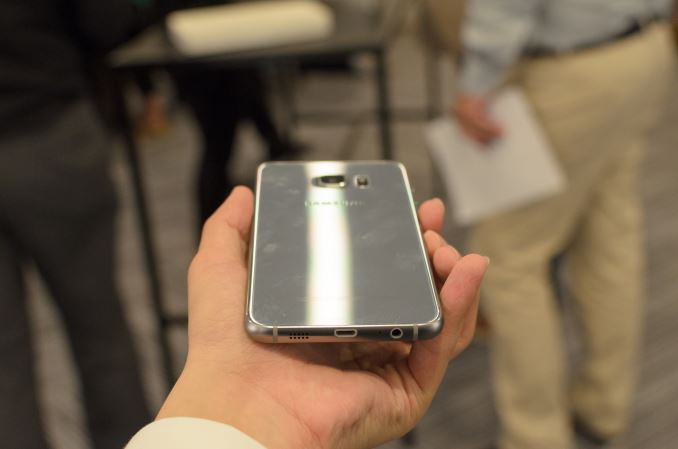 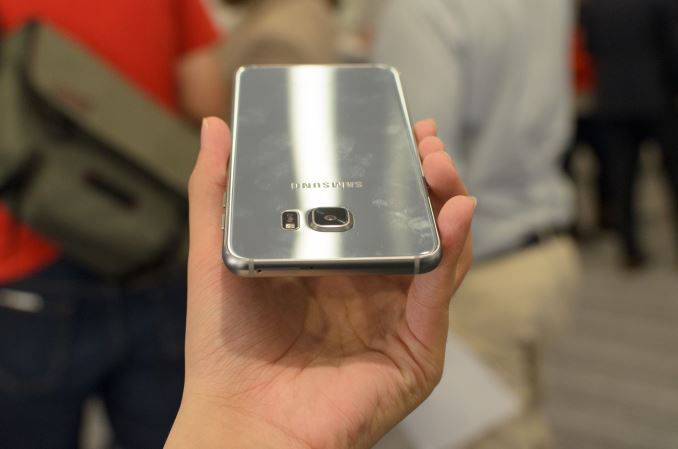 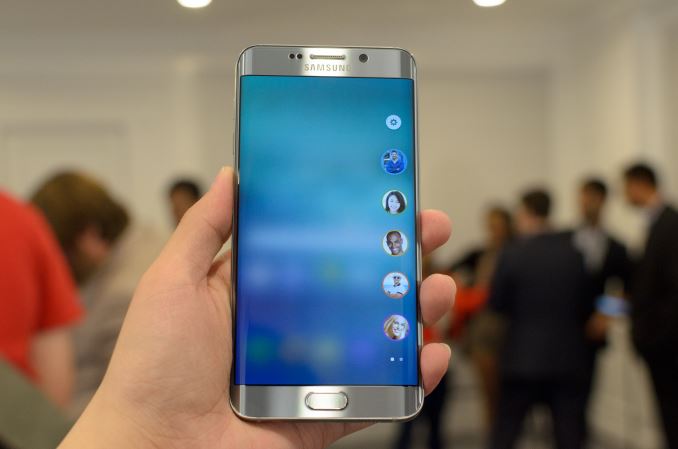