When we first sat down to figure out what processor(s) should power our high-end professional 3D system we initially chose a Pentium 4 2.4B GHz. Running on an i850E platform with 512MB RDRAM memory, the 533MHz FSB 2.4GHz Pentium 4 would make for one fast system. It was only after some thinking that we realized that there was a better solution.

The majority of programs that professional 3D artists use are multithreaded applications. This means that the programs are compiled in such a way that tasks will complete faster and system performance will be higher over all on systems that have more than one processor. Some of the popular 3D rendering applications that are multithreaded include 3D Studio Max, Maya, and SPEC but there are many more out there. It was with this information that we decided that perhaps the Pentium 4 was not the best solution for our professional 3D system.

The more we thought about it the more sense a dual Athlon system made. Not only would a dual Athlon processor configuration benefit in multithreaded applications, the system would also be based off Athlon CPUs which have typically done well in 3D rendering programs.

Read up on the Athlon MP processor in our Athlon MP review.

Deciding what motherboard should power our two Athlon MP 2000+ processors was not very difficult. There are really only a handful of AMD 760MPX motherboards on the market and one of the best ones available is the Tyan Tiger MPX. It is almost as if the Tiger MPX was designed to go in a system such as our high-end professional 3D one.

The Tiger MPX is very similar to the Tyan Thunder K7X except the Tiger MPX does not contain some of the extras that are not necessary in a system such as our (like SCSI support). In fact, the Tyan Tiger MPX is essentially a Tiger MP motherboard with the updated AMD 760MPX chipset (as opposed to the 760MP chipset).

We were more than pleased with the capabilities of the Tiger MPX. It was able to deliver stellar performance at a price that most other dual processor motherboards cannot come close to. The motherboard may not have many bells or whistles but it is about as stable as a motherboard can be. 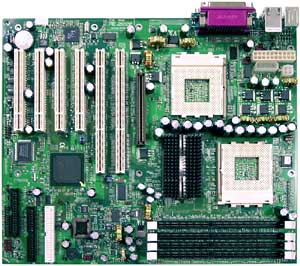 There are a few other 760MPX solutions out there including an MSI and IWILL board. We chose the Tiger MPX over these offerings because of our personal experience with the Tyan Tiger MPX. The other boards will end up costing about the same amount of money as the Tiger MPX, so you are probably best sticking with this solution.

Read up on the Tyan Tiger MPX's brother, the Tiger MP.

In a 760MPX solution, such as the Tyan Tiger MPX, choosing PC2100 memory makes the most sense. Although PC2700 (333MHz) memory is available in fairly large quantities now, using this speed memory will result in no performance increase on the any 760MPX solution since the memory will run at PC2100 speeds regardless.

We have found that 760MPX boards, especially the Tyan versions, are very sensitive when it comes to memory. We have seen a number of issues arise out of using poor quality DDR memory on dual processor boards such as these. For this reason we chose to go with Crucial's DDR memory solution. Crucial is a great memory manufacturer and the prices of their PC2100 memory are on par with all the other large name manufactures out there. You are pretty safe going with memory from one of the big memory producers such as Mushkin, Kingston, ect but stay away from no-name brands. These sticks may save you some money but the amount of frustration that poor quality memory can cause is simply not worth it.

If you are looking for faster performance, take a look at getting two 512MB sticks. It will only bring the cost of the system up another $127 and can make the transition to new professional 3D applications smoother.

The most expensive component inside our high-end professional 3D system is the 3DLabs Wildcat VP 870 video card. At almost $600, the card is much more expensive than consumer-level video cards but the price is more than justified.

The Wildcat VP 870 was the first and is currently the only fully programmable VPU (visual processing unit). This means that the card has the ability to run many of the complex 3D rendering tasks in the chips hardware, as opposed to offloading these instructions to the CPU. There is no question that this is where the world of professional 3D graphics will go, as it allows rendering times to be cut into a fraction of what they used to and makes full quality previews a reality. Because of its programmable 3D pipeline, a card in the Wildcat series was the best solution for our high-end professional 3D system.

The Wildcat comes in three models: the VP 760 with 64MB of memory, the VP 870 with 128MB of memory, and the VP 970 with 128MB of memory. Although the Wildcat VP 970 is the top of the line P10 based card, its steep price kept us away from it. The Wildcat VP 970 costs about $600 more than the Wildcat VP 760 and only offers a mediocre speed increase thanks to a slightly higher core and memory clock. Other than the higher clock speeds of the VP 970 the card also includes dual DVI functionality; usefully in the extremely high-end professional 3D systems but not so useful in our high-end system. 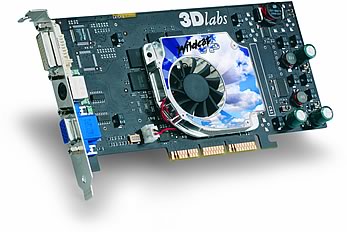 The P10 in the Wildcat VP 870 is not without drawbacks, however. The programmable 3D pipeline in the P10 chip is not fully floating point, meaning that it does not offer the advantages of a fully floating pipeline like the one in the ATI Fire GL X1. This also leaves the P10 without full DX9 support. ATI's Fire GL X1 was only announced recently and has yet to find its way to the market nor has a price for the card been set. For these reasons we will stick to the 3DLabs Wildcat VP 870 this week.

Read up on the 3DLabs P10 chip here. We haven't gotten a chance to look at the new Wildcat series cards yet but the folks over at Tomshardware.com have and were very impressed with the product. 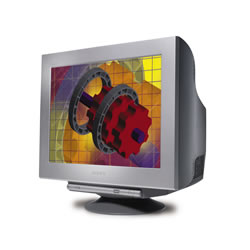 A monitor is of the utmost importance in a professional 3D setting. If you are doing even the most basic 3D creation tasks you will likely be spending hours upon hours in front of the computer. We knew that our professional 3D system had to have a great monitor and the Sony DeluxePro CPD-G520P seems to deliver.

The G520P is a step above the E540 21" monitors that we have recommended in other high-end buyer's guides. The monitor still uses the same flat Trinitron tube but the one in the G520P is a bit more advanced. Desktop space is very important to 3D artists. More desktop space means that more of a scene can be viewed at once and if more of a scene can be viewed then more work can get done.

How does go about getting more desktop space? Simple, use a higher resolution. The E540 we recommended before runs at a recommended resolution of 1600x1200 at 85Hz: great for gaming and office work but a bit low for complex professional 3D design. The tube in the G520P is able to run at 1880x1440 at 85Hz, creating a good bit more visible area on the screen. It is for this reason that we decided to go with the G520P despite the fact that it is $200 more than the lower end E540.

Another option for those in the market for a professional 3D system is a DVI flat panel monitor. Many graphics designers are using DVI LCD displays due to their fully digital interface and great image clarity. The only problem we see with using a LCD panel on our professional 3D system is the price. The $750 that the 21" G520P set us back would only get us a 17" (or perhaps 18") LCD panel that is able to run at 1280x1024. This would result in a drastic loss of desktop area. If you budget can handle it, you may want to go with two 17" LCD panels or perhaps one 20" or 21" LCD panel but it will set you back much more money (almost $1000).