Officially announced at Computex 2021, AMD and its vendors unveiled a new series of AM4 based motherboards for Ryzen 5000 processors. The new X570S chipset is, really, not that different from the previous version launched back in 2019 from a technical standpoint. The main user difference is that all of the X570S models now feature a passively cooled chipset. Some vendors have opted to either refresh existing models, or others are releasing completely new variants, such as the ASRock X570S PG Riptide we are reviewing today. Aimed at the entry-level extreme chipset, the X570S PG Riptide features a Killer-based 2.5 GbE controller, dual PCIe 4.0 x4 M.2 slots, and support for up to 128 GB of DDR4-5000. 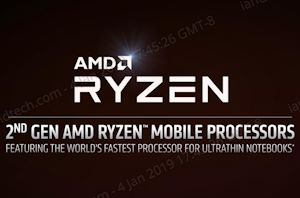 This year at CES, we have a series of announcements from AMD before the company's keynote presentation. Addressing the company's mobile offerings, AMD is launching the first parts of...